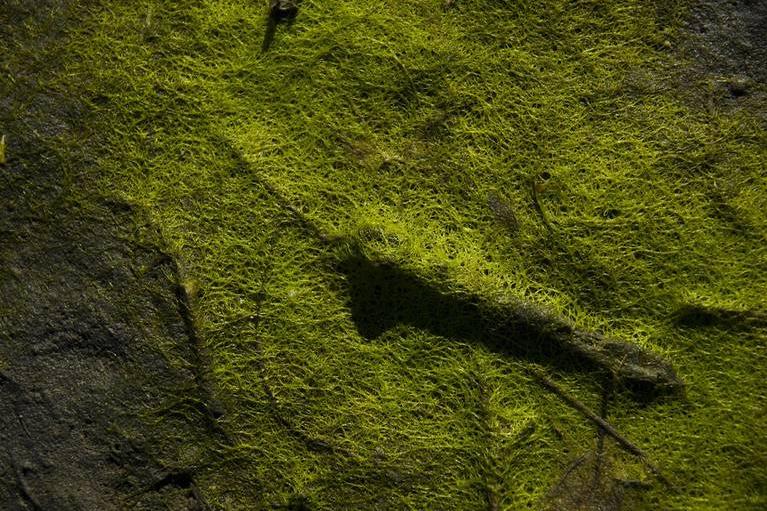 Algae–based biofuel is a new energy source that has been getting a lot of attention lately. Certain types of algae contain natural oils that can be readily distilled into a vegetable oil or a number of petroleum-like products that could serve as drop-in replacements for gasoline, diesel, and jet fuel.

But because it’s a bio-fuel, it is essentially carbon-neutral because the carbon emitted when it is burned had just recently been absorbed as food, which means that the net CO2 emission is essentially the same as if the algae had never been grown. That does not include CO2 utilized in production. Industry claims assert that algae-based bio-diesel has a GHG footprint that is 93 percent less than conventional diesel. Some algae production is sited near sources of CO2 such as power plants, in a kind of symbiotic relationship. Algae-based fuel yields considerably more energy per unit area than other bio-fuels. It can also be grown on land otherwise unsuitable for agriculture. The technology is quickly moving out of the lab and into commercial scale production. A number of companies developing refineries include Solazyme, Sapphire Energy (which just last week announced another $144 million in funding) and OPXBIO. Aviation trials with several airlines including United and Qantas have been successfully completed using fuel blends of up to 40 percent algae-derived fuel.

Algae was initially raised in large shallow ponds which produced about 5,000 gallons per acre-year and required a fair amount of water to compensate for evaporation. More recently, companies have migrated to vertical photo bio-reactors (PBRs) that are gravity fed, with no evaporation, and in which 85 percent of the water is recycled along with excess nutrients and CO2.

Here is a list of pros and cons for algae-based biofuels.

In summary, algae-based bio-fuel is a promising energy source that is in the latter stages of development. A number of issues related to the ultimate cost of the product need to be resolved, but there is a good deal of research money going into this as production is beginning to scale up. Land issues can be addressed using marginal land. Water can be recycled in reactors. Cold flow issues might result in the fuels being blended with other fuels or possibly additives. Fertilizer issues could be addressed using waste streams, thereby recycling the critical nutrients. Time will tell, though I believe this is an important technology to watch.

RP Siegel, PE, is the President of Rain Mountain LLC. He is also the co-author of the eco-thriller Vapor Trails, the first in a series covering the human side of various sustainability issues including energy, food, and water. Now available on Kindle.