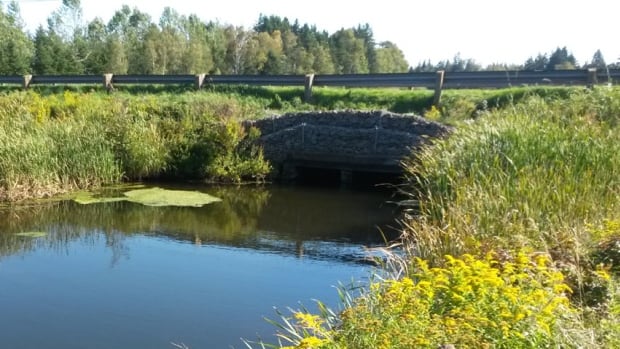 A provincial bridge is causing a backup of duckweed on Johnston’s River, and a local resident is complaining about a terrible smell as it rots.

John Joe Sark told CBC News duckweed, a small, floating plant, accumulates every year on the surface of the water, right next to his house. It smells like rotten eggs when it decomposes.

Sark said the bridge over the river has a small opening, which prevents a free flow of water and plants.

“I think that the bridge has to be redone and make the opening bigger, so that we have a natural flush,” said Sark.

“It wasn’t like this, they say, before they built the bridge and the little fish ladder.”

CBC News contacted the Department of Forests, Fish and Wildlife, and received a response by email.

“Staff have removed some of the duckweed, however a steady supply comes from upstream with each tide cycle,” it said.

The department said it will continue to monitor the situation and it expects that conditions will gradually improve.

For mobile device users: Should the province be responsible for the smell created by duckweed at Johnston’s River?

The Tahoe Fund has released a new resource study it commissioned from TSS Consultants in partnership with Sierra Valley Enterprises,