A common weed that chokes Britain’s ponds could be the answer to the world’s food crisis, scientists claim.

Duckweed – the little green dots that rapidly blanket water – are more appetisingly known as ‘water lentils’ in France and Spain.

While they may not look particularly tasty at first glance, they are very high in protein in their raw state, at 45 per cent, compared to 36 per cent for soy beans. 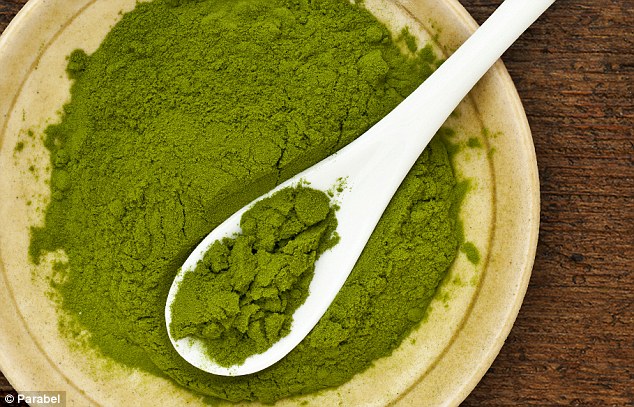 Lentein powder (pictured) is 68 per cent protein and is made from duckweed, a common plant that floats on the surface of ponds and lakes

Now food company Parabel has found a way to grind them up to make flour it calls ‘Lentein’ – and claims it would be a useful alternative to whey powder, which is made from milk as well as soya.

Lentein powder is green and contains 68 per cent protein as well as fibre. The company is working on making a white version of the flour too.

With the world needing 70 per cent more food in the next 30 years to support its inhabitants according to some estimates, the makers claim that their plant could help meet growing demand.

The company said the plant – known botanically as lemnoidiae – is grown in open air water tanks which do not need prime farming land and can be grown almost anywhere where there is a water supply.

It added that the plant doubles in size every 16-32 hours, so it can be harvested every day. 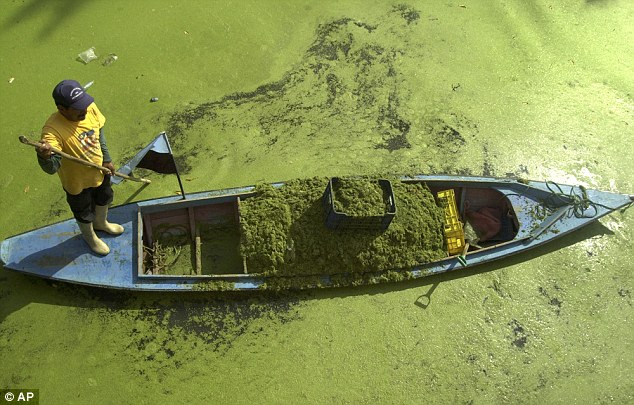 Duckweed is a common plant in the UK and is considered a weed as it covers the surface of ponds. It is abundant in many areas worldwide and covers 12 percent of Maracaibo Lake in Venezuela (pictured)

WHY SHOULD WE EAT DUCKWEED?

Duckweed is more appetisingly known as water lentils in France and Spain.

It’s high in protein in its raw state, at 45 per cent. By comparison, soy beans are 35 per cent protein.

Ground up, the duckweed makes Lentein powder, which is 68 per cent protein and also contains fibre.

The makers of the powder believe it could help feed the world’s ever-increasing population.

The plant is said to have a ‘fresh, grassy taste’ and is eaten in Asia.

As most of the water is recycled – and the growing plants help prevent evaporation – it is said to use less water than comparable crops as well.

Cecilia Wittbjers, Paragel’s director of marketing, said the discovery that the plant had potential was only made in 2011, when they were conducting research into growing algae for food.

This week the plant won an Innovation Award at the Institute of Food Technologies conference in Chicago.

‘It’s a very common plant that grows all over the world, but grows best at the equator,’ she said.

‘You can make anything you make with soy or whey powder. Everyone wants to fortify products with protein.

‘The most incredible thing is it reproduces so quickly, in 24 hours.’

The whole plant is used and is in no way genetically modified, she added.

Ms Wittbjers said the plant has a ‘fresh, grassy’ taste and is eaten in parts of Asia. It’s also licensed as an animal feed in Europe. but 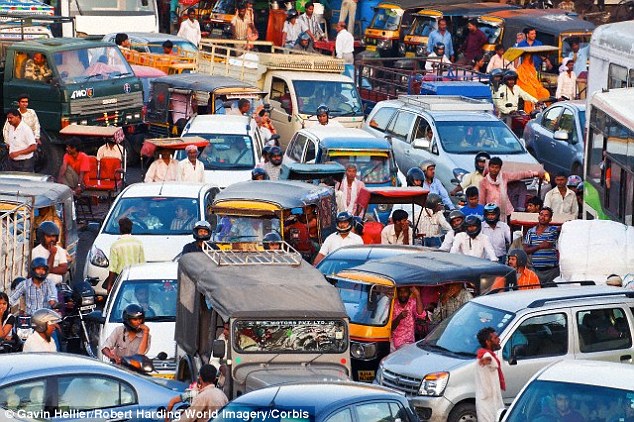 With the world needing 70 per cent more food in the next 30 years to support its inhabitants according to some estimates, the makers of the powder claim that their plant could help meet growing demand. A stock image of a congested city scene in Jaipur, India is shown

‘We don’t know why it’s not been used before,’ she said.

The company is building a plant in Uganda which should be producing 2,000 tons of Lentein in the first year.

Duncan Cameron, professor of Plant and Soil biology at the University of Sheffield, who is not connected with the product, said one concern might be how much water the plant needs, and its requirements for nutrients.

He said: ‘It never occurred to me that it could be a food stuff. Any alternative sources of protein that are sustainable are important to global food security.

However, he added: ‘Nothing should be seen as a magic bullet. The resource cost of any novel agricultural intervention needs to be weighed up very carefully.

‘But just because an idea sounds radical is no reason to throw it out in my mind.’