The Shell Rock River Watershed District is seeking to educate residents about a green plant seen on the surface of Albert Lea’s Fountain Lake this summer.

Though from a distance the plant can be mistaken for algae, it is actually called duckweed, said Jerad Stricker, conservation technician with the Watershed District.

According to the Minnesota Department of Natural Resources, duckweed is a tiny, free-floating green plant that consists of a leaf or a cluster of leaves with small roots that hang down into the water. 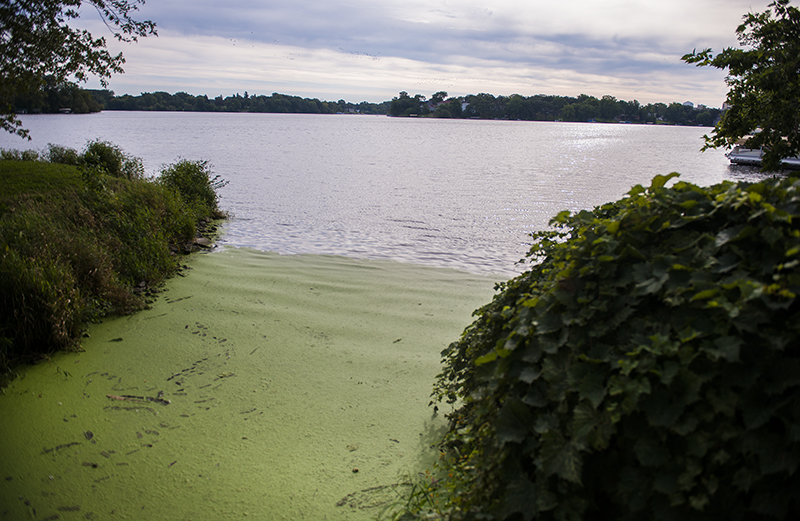 Duckweed has been seen more and more on the surface of Fountain Lake this summer. – Colleen Harrison/Albert Lea Tribune

It is one of the smallest flowering plants in the world, according to the Watershed District, and it does not have stems or leaves.

Waterfowl and marsh birds eat duckweed, and it supports insects that fish eat, the agency stated. It can also provide shelter and protection for aquatic animals, such as frogs, snakes, fish, insects, crustaceans and others.

The agency states duckweed has a round, slightly oval-shaped body called a frond. Fronds tend to grab each other, forming thick mats in the water.

The agency said the plant is often mistaken for algae since they are both green and cover water surfaces. Though they may look alike, they are actually competitors.

While algae can sometimes be toxic, duckweed is not toxic, and it is not bad to have duckweed in lakes, Stricker said.

He said duckweed needs good water clarity to grow, but he noted it can grow quicker in ponds, marshes and lakes with higher nutrient levels, such as phosphorus.

Stricker said though the watershed officials recognize there are still issues with some phosphorus in the lake, he said the lake is much healthier than it has been. It does not get algae blooms and has a water clarity of anywhere from a few feet to five feet deep.

He said water quality has been fairly consistent over the last four years.

Stricker said duckweed has been in area lakes most of the summer and has been flushed from the bays of Fountain Lake into the larger parts of the lake by big rains.

The plant is spread on the feet and bodies of waterfowl and small mammals, as well as by moving water.

He expected the duckweed should fade out once lake temperatures start cooling. In the meantime it can spread to the area’s other lakes, such as Pickerel Lake and Albert Lea Lake.

Stricker said there is duckweed in these lakes as well, but it is not as prevalent.

Information about duckweed has been placed at the boat ramps and in other kiosks around town.

It is a tiny, free-floating green plant that typically consists of a leaf or a cluster of leaves with small roots that hang down into the water. It provides food for waterfowl and marsh birds and supports insects that fish eat.

Peterson Oil Service Inc. of Worcester will pay $450,000 and be required to improve its record-keeping process to resolve allegations