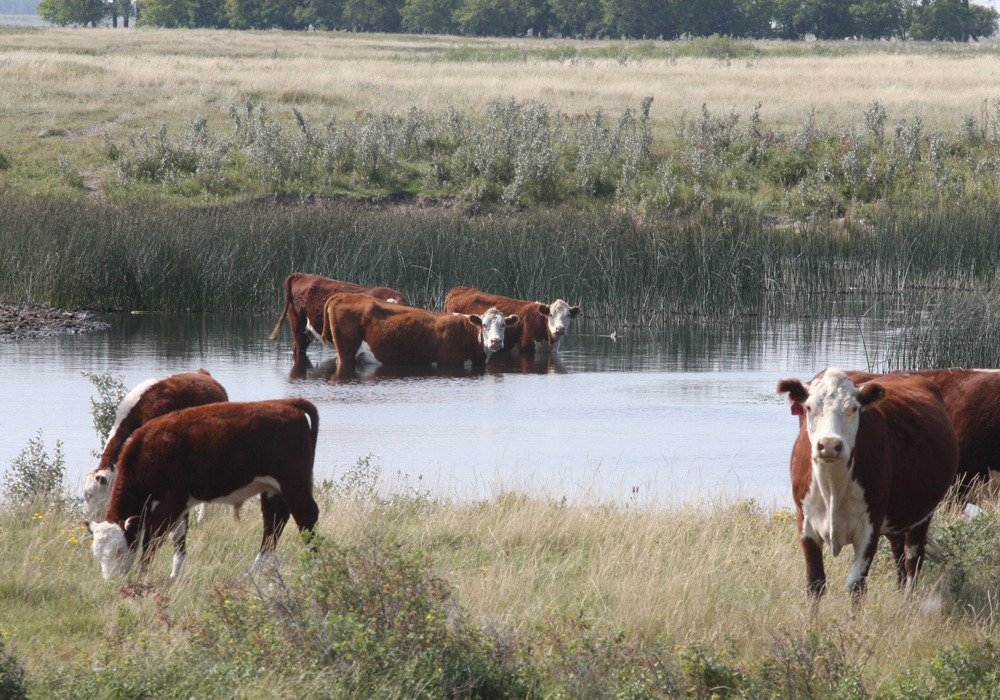 Several cattle in Manitoba’s Interlake died in late August, after drinking water from a contaminated dugout.

The most likely cause of death was blue-green algae, or cyanobacteria, said Keri Hudson-Reykdal, a veterinarian in Ashern, Man.

“This seems to be a big issue this year — lots of dogs affected in Canada and the U.S. in the news and on social media,” Hudson-Reykdal said in an e-mail.

The cattle belonged to a producer who is a client of Hudson-Reykdal.

It’s been extremely dry in Manitoba this summer and dugout levels are well-below normal in most regions of the province. Blue-green algae often thrives in hot and dry weather, but not all species are dangerous.

“We have lots of varieties of blue-green algae. Only about half of them release toxin,” said Leah Clark, provincial cattle specialist with Saskatchewan’s ministry of agriculture.

In some cases, cyanobacteria can produce deadly levels of neuro and liver toxins.

“Signs of neurotoxin poisoning can appear within five minutes to up to several hours after ingestion,” reads a statement of North Dakota State University’s website. “In animals, symptoms include weakness, staggering, muscle tremors, difficulty breathing, convulsions and, ultimately, death…. Typically, livestock are found dead before producers observe symptoms. If cyanobacterial poisoning is suspected as the cause of death, producers should check the edges of ponds for dead wildlife.”

However, cyanobacteria only releases toxin when it is stressed or dying.

“Once it’s dying (that) is the problem,” Clark said.

When it comes to cyanobacteria, livestock producers must keep two things in mind — proper identification and treatment.

“What I’ve been promoting is identifying. Is it blue-green algae or is it not?” Clark said. “Often times, it gets confused with duckweed, which is a surface floating plant. Cyanobacteria actually lives within the water column… it doesn’t like direct oxygen, so it lives free-floating within the water column…. It starts to create some floating material, as it’s dying off or as it’s maturing.”

If producers are struggling with identification, they should ask their local livestock specialist for help, Clark said.

If it is blue-green algae, treat the dugout with a registered copper-sulfate product.

“Copper sulfate is also bluestone. That’s what most guys know,” she said. “With these treatments, more is not better. (It) can be toxic to animals, so it’s all about proper rates and dosage.”

As for prevention, cyanobacteria flourishes in water that is loaded with nutrients. Livestock defecating or urinating in a dugout can feed the growth of blue-green algae.

“If we can get some remote watering, it will help reduce those problems,” Clark said.

For more information on cyanobacteria, visit these sources: