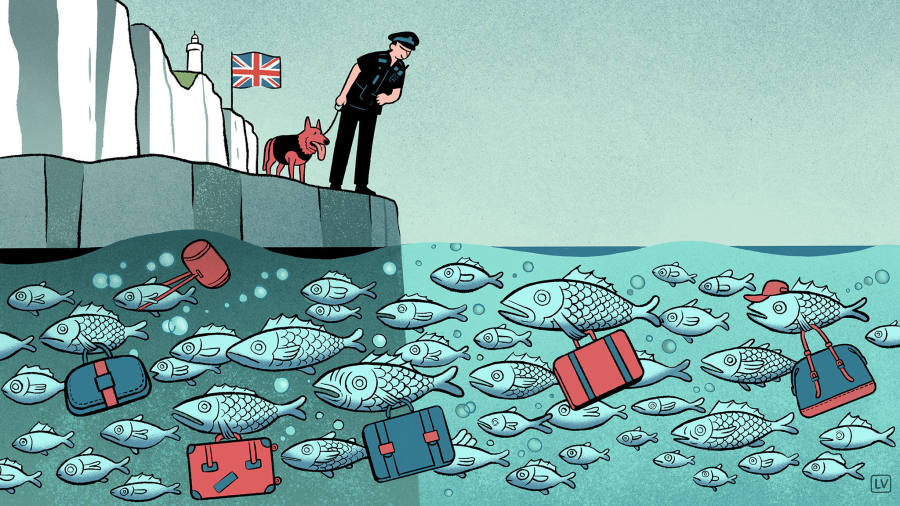 The British economy could soon be sleeping with the fishes. As the stress points of post-Brexit negotiations take shape, there are fears that the government’s pledge to protect the nation’s minnow of a fishing industry could torpedo a trade deal.

Oh yes; the future of fish is going to be one of the big issues of the next stage of Brexit. And yet we might begin to wonder if even Boris Johnson is quite as committed to protecting British fish as he claims.

For a start, almost nothing is being done to halt free movement of fish. European shoals are entering British waters without any documentation or anything close to a Tier 1 visa. Many claim to be fleeing persecution and seek asylum on environmental grounds under the rules governing exceptional leave to sustain.

Equally, huge numbers of British fish are showing no regard for the limits of UK territorial waters, blithely swimming into international seas where they can be swept up by European trawlers. These fish traffickers are kidnapping British fish for profit and then sending them to the mainland, where few survive.

Already, there are plans for more coastal protection vessels and drones to monitor shipping areas for foreign trawlers and asylum-seeking brill. But if Britain is serious about protecting its fish, it is going to need to go further.

Nothing less than an Australian points system is necessary to separate and designate British fish from economic marine migrants. It is going to be quite a task to complete the paperwork on the entire ecosystem before the end of this year’s transition period, so ministers accept there may be some disruption on the border.

Clearly, the nation will want to keep and attract highly skilled fish such as cod, bass and turbot. These species will be awarded large points totals, making it easier for them to enter the territorial waters.

Extra points will, naturally, be awarded for proficiency in English, although officials stress that an ability to speak it will not be a requirement as long as the fish commit to language classes.

Obviously, those fish seeking full settled status will at some point have to take a citizenship test tailored to their circumstances. Entrants would be expected to know the dates of Captain Cook’s voyages, the British name for the god of the ocean (Captain Birdseye) and who owns Gibraltar (correct answer: we do).

The quality of the job on offer to fish migrants will also be relevant. There are relatively few poisson points for those destined for low-value fish and chip shops. However, fish with a pre-offer of employment at one of Rick Stein’s restaurants should sail in. Salmon is particularly welcome. One official said: “We are building a ladder and Europe is going to pay for it.”

There will, however, be limits on low-skilled pollock — also known as false cod — which has been slipping through the net (see what I did there) and entering British waters in high numbers to the discomfort of the indigenous fish community.

Other British fish have stressed that they have nothing against the pollock but merely wish to control its numbers before they put a strain on key infrastructure and services. Some of the incoming fish have been jumping the waiting list for homes and hatchery places.

It is hoped that much of the low-value fish can be resettled on the European mainland, which has already shown an openness to marine migrants, while in Scotland, nationalists want their own visa to attract fish to key Scottish posts. Sadly, London says this won’t work as there are inadequate provisions to stop the fish swimming south.

There have also been concerns that a number of British fish are seeking alternative citizenship as a result of Brexit. The Irish embassy reports an influx of passport applications from fish with Irish grandparents, as those who can seek to guarantee their rights to free movement across EU waters.

British fish, meanwhile, will be eligible for a blue passport and able to use the new 50p coin with the marvellous inscription “Peace, prosperity and chips with all nations”. It sounds terribly inspiring but if the negotiations get tough, the scales may yet fall from our eyes.

Follow @FTMag on Twitter to find out about our latest stories first. Listen to our culture podcast, Culture Call, where editors Gris and Lilah dig into the trends shaping life in the 2020s, interview the people breaking new ground and bring you behind the scenes of FT Life & Arts journalism. Subscribe on Apple, Spotify, or wherever you listen.