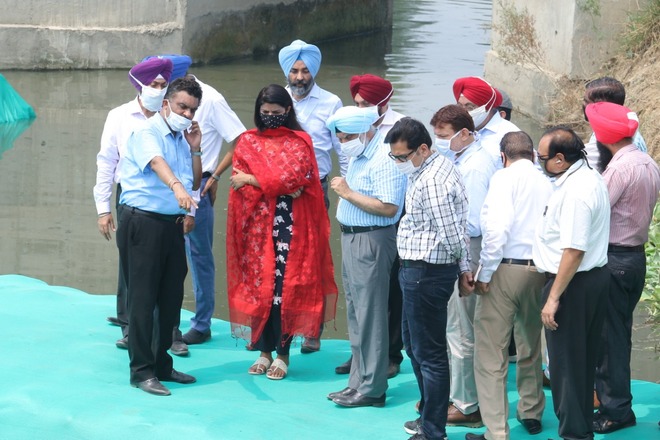 With many of the sewage treatment plants (STPs) in Punjab and a majority in the Doaba region remaining non-functional, the PPCB is now banking on bioremediation and nanobubble technology for treating waste water in the effluent-ridden drains and river bodies. The very first in-situ remediation project was set up at Bhulana drain in Kapurthala on Saturday, which the department claims is expected to reduce the BoD level in the drain by the end of two months.

Bhulana is the controversial drain which is one of prime spots causing effluent discharge into the holy Kali Bein. Bhulana drain carries wastewater of 27 colonies near Rawal village besides wastewater of Rawal village, which eventually converges into holy Bein near Hussainpura village (Kapurthala), thereby deteriorating the quality of water of the Bein by discharging untreated wastewater.

The Punjab Pollution Control Board (PPCB)has developed low-cost model of in-situ remediation of Bhulana, based on the combination of bioremediation and phytoremediation enhanced by the nanobubble technology to treat wastewater. Chandigarh based firm M/s KBK Environ Infrastructures Limited Chandigarh has lent the nanobubble generator machine for the oxygenation of wastewater to the PPCB.

As a pilot project, the department might also extend the model to other organic drains in the region or the state based on the two-month trial success.

Prof Satinder Singh Marwaha, Chairman, PPCB, said, “Trials were carried out with the nanobubble machine at a Kharar-based pond for a month which showed successful results. The BoD levels were reduced between10 to 50 from 200 in a month.

However, that was standing water and the quantum was lesser. “For the Bhulana drain we are also trying to recharge it with duckweed and also installing a nanobubble generator, which will refurbish oxygen level in the drain. This project is only meant for water bodies with organic wastes like fecal matter and kitchen wastes. Hence, if successful, it can be replicated at other small drains. It all depends on the results,” he said.

Sampling is being conducted at the drain and daily pollutant constituent reports shall be surveilled and compared by the PPCB to chart the progress of the project.

Dr MNV Prasad of the department of plant sciences at the University of Hyderabad, an expert in the field of bioremediation technology in India, said, “Bioremediation is a technology widely acknowledged in India both for soil and water but the results of a certain project depend on the amount and nature of pollutants in a given water body. Nanotechnology is another science which is now being used for water replenishment but detailed audits of the water constituents and the pollutants are first needed to determine the degree of success a certain project might achieve.”