A great way to support a healthy diet is by eating fresh fruits and vegetables. The folks working in zero gravity in space are no exception. And as humans plan for ambitious exploration to and possible settlement on Moon and beyond, scientists are looking into sustainable ways to grow highly nutritious foods in microgravity to give astronauts a readily available supply of daily greens.

Jeff Bezos-owned Blue Origin’s next New Shepard mission will carry with it the LilyPond, a hydroponic (growth of plants without soil) chamber for growing edible aquatic plants in space, developed by the Space Lab Technologies. The payloads will fly to space and experience several minutes of microgravity before returning to Earth, giving researchers valuable data about how their technologies perform.

The mission’s launch is scheduled for October 13 local time as part of NASA’s Flight Opportunities program.

READ | NASA Says ‘asteroid’ Approaching Earth Turned Out To Be ‘mini-moon’; All You Need To Know

How will the test work?

Christine Escobar, vice president of Space Lab and principal investigator for the microgravity LilyPond explains how in space, astronauts need crops that produce a lot of nutritious material with minimal resources and volume – and those that can grow very fast, tolerate environmental extremes, and taste good.

Looking at these parameters, the company zeroed in on duckweed (also known as water lentils) – as their test crop. With its high protein content (up to 45%) and a rich supply of antioxidants, amino acids, and Omega-3s, the crunchy vegetable is sometimes called a superfood. Escobar said these rapidly growing plants are ideal for space because they do not require soil or another growing media – which means fewer materials, less mass, and less waste for resource-intensive space missions. But realizing the promise of such plants requires the right technology.

“The two biggest issues with growing a floating aquatic plant in space are providing a stable water surface that is open to the air, and harvesting the plant,” explained Escobar.

In the absence of gravity, getting water to stay where you put it can be a challenge. To address this issue, Space Lab began developing the microgravity LilyPond in collaboration with the University of Colorado at Boulder in 2017 with funding from a special NASA program. Closely stacked shallow growth trays provide a stable water surface on which the plant grows, with water delivered via open capillary channels and LED panels providing an efficient light source. When the plants are ready to eat, a rotary sieve separates them from the water, which can be recycled for the next crop.

“The more we explore, the more we discover that it pays to reuse, recycle, and regenerate consumable resources on board a spacecraft, rather than carrying them all with you and then throwing away the waste,” said Escobar.

Following the upcoming test flight, Space Lab will use video data to verify the performance of their growth chamber, and make any necessary design changes prior to proposing the technology for an orbital test on the space station. 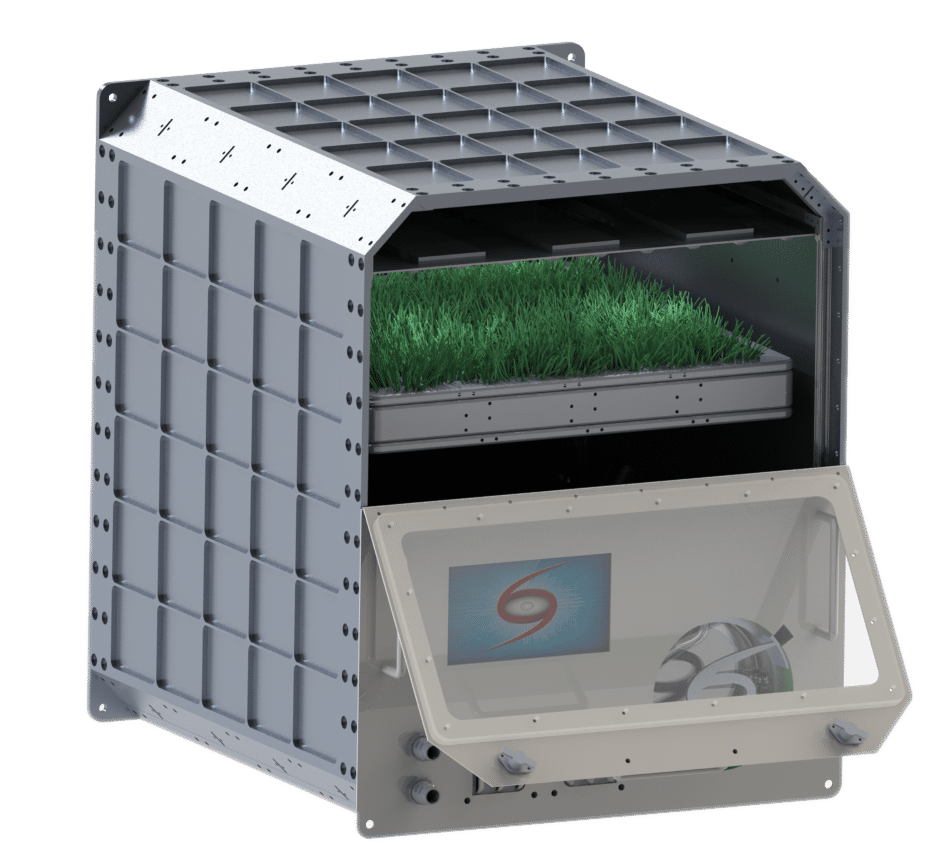