Litter made of glitter — such as used in clothes, makeup and craft projects — is hurting freshwater habitats and eco-friendly alternatives are as bad, a study found.

In fact, researchers from Cambridgeshire warned, supposedly biodegradable glitter particles are just as toxic and can even encourage the spread of invasive species.

Glitter — which is now usually made of plastic — can be washed down drains and into rivers, lakes and ponds, where they can stunt plant growth and harm animals.

While such freshwater habitats account for only three per cent of the world’s waters, they are home to more than 100,000 species of plants of animals.

Scientists in the UK and elsewhere have called for a complete ban on glitter — which takes thousands of years to break down when it pollutes the environment. 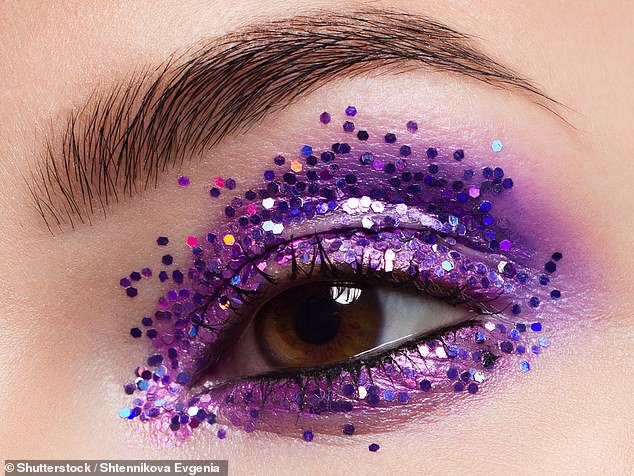 Litter made of glitter — such as used in clothes, makeup (pictured) and craft projects — is hurting freshwater habitats and eco-friendly alternatives are as bad, a study found

Most modern glitter is made from a film of Polyethylene terephthalate (or PET), which is coated with aluminium and another layer of thin plastic.

‘Many of the microplastics found in our rivers and oceans have taken years to form, as larger pieces of plastic are broken down over time,’ said paper author and ecologist Dannielle Green of the Anglia Ruskin University in Cambridge.

‘However, glitter is a ready-made microplastic that is commonly found in our homes and — particularly through cosmetics — is washed off in our sinks and into the water system,’ she explained.

In their study, Dr Green and colleagues evaluated the impact of glitter on living freshwater habitats in a laboratory setting.

They found that — in glitter infested waters — the root length of common duckweed was halved after five weeks of exposure to the microplastics pollution.

Chlorophyll levels in the water were also found to become three times lower than usual — suggesting the presence of fewer phytoplankton or microalgae.

Phytoplankton are microscopic organisms that provide food for a wide range of water creatures and absorb carbon dioxide from the atmosphere.

The team also evaluated the impact of so-called eco-friendly glitters — which are made of such materials as mica, a flaky mineral, and modified regenerated cellulose.

While the latter is mainly sourced from eucalyptus trees, it is still coated in plastic, the researchers explained.

The team found that pollution from eco-friendly glitter was just as destructive to freshwater environments as its regular counterpart. 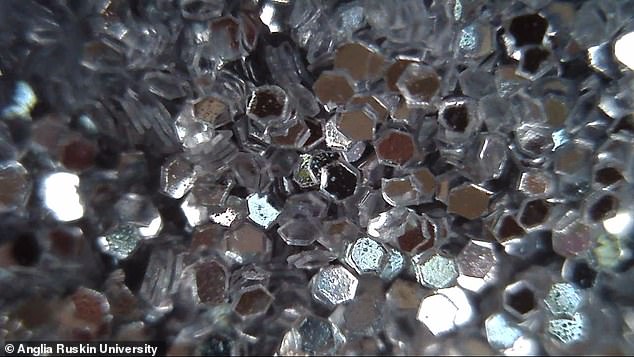 Glitter — which is now usually made of plastic, as pictured — can be washed down drains and into rivers, lakes and ponds, where they can stunt plant growth and harm animals 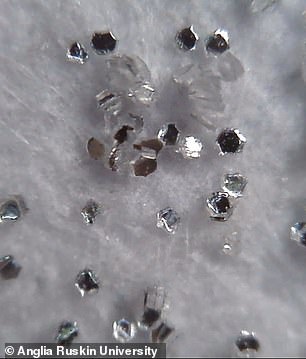 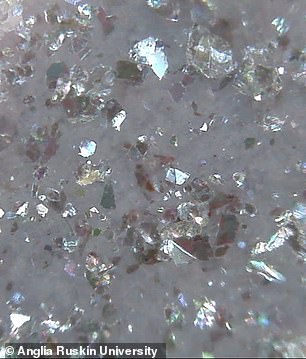 The team also evaluated the impact of so-called eco-friendly glitters — which are made of such materials as mica, a flaky mineral, (pictured right) and modified regenerated cellulose (left). While the latter is mainly sourced from eucalyptus trees, it is still coated in plastic, the researchers explained. The team found that pollution from eco-friendly glitter was just as destructive to freshwater environments as its r e gular counterpart. 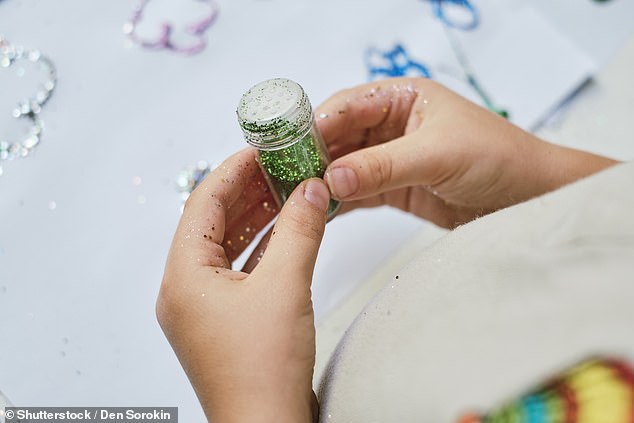 ‘Our study is the first to look at the effects of glitter in a freshwater environment,’ explained Dr Green.

‘We found that both conventional and alternative glitters can have a serious ecological impact on aquatic ecosystems within a short period of time.’

‘All types — including so-called biodegradable glitter — have a negative effect on important primary producers which are the base of the food web.’

‘Glitter with a biodegradable cellulose core has an additional impact of encouraging the growth of an invasive species.’

We believe these effects could be caused by leachate from the glitters, possibly from their plastic coating or other materials involved in their production, and our future research will investigate this in greater detail.’

The full findings of the study were published in the Journal of Hazardous Materials.

Glitter is being stripped from Christmas cards and plastic is being purged from packaging as high street retailers try to deliver a more eco-friendly festive season this year.

Crackers, wrapping paper, present bags, flowers, plants and wreaths are now 100 per cent glitter-free from Morrisons supermarket in its ‘fight against plastic pollution’.

Boots UK has eliminated 2,020 tonnes of plastic from its Christmas gift ranges by ditching single-use plastic packaging. It means that all gift packaging is now plastic-free and is intended to be recycled or reused.

Glitter is made from tiny particles of plastic and is an ecological hazard if it becomes dispersed on land, rivers and oceans — where it takes hundreds to thousands of years to degrade.

Morrisons home director Christine Bryce said: ‘Every time a cracker is pulled, or a card is opened, plastics have been used … but just the once.’

‘We’ve taken glitter and plastic out of our festive range this year, so that our customers can enjoy their festivities without worrying about the environmental impact.’

Morrisons estimates that it will be removing more than 50 tonnes of plastic from its shelves during the festive period, due to the glitter ban and its drive to reduce plastic in its Christmas ranges.

Items such as games and gifts will now be made out of paper, metal or wood and will be designed to be kept and reused.

Cracker shells will be made from Forest Stewardship Council-accredited cardboard and decorated with metallic based inks.

The amount of plastic packaging on cards and decorations has also been stripped back. Felt, hessian and wooden decorations will replace them.

Boots UK has also joined up with BBC Earth on a range of bathroom gifts which it says are kinder to the planet and which will help save the equivalent of more than 990,000 plastic bottles.

It says the aim is to help customers to ‘gift more mindfully’ this Christmas at a time when searches for its eco-friendly products have boomed online.

Meanwhile, Waitrose and John Lewis have removed glitter from all their single-use Christmas products.

‘This also includes flowers and plants at Waitrose.’