Although fossil fuels have been an essential energy source for many centuries, they come with many disadvantages that do more harm than good in the long run. Algae biofuels may be the future of alternative, renewable energy resources.
Still relatively new to the research and energy industry, algae biofuels have the potential to produce a lot of energy while being sustainable and beneficial for the environment. Algae are microorganisms that grow in aquatic environments and undergo photosynthesis to create biomass.
There are two different types of algae that can be produced to make biofuels: macroalgae and microalgae.
Macroalgae are large, multi-cellular organisms that are measured in inches and grow in ponds. Microalgae are micro, unicellular organisms that are measured in micrometers and grow in suspension within a body of water.
A few companies have attempted to test the waters of algae biofuel production and the market, but currently none are able to maximise productivity and cost efficiency in the production of algae biofuels, leaving many doubtful of its potential.
However, the extent of its potential and use have not been discovered yet, so research and development (R&D) of algae biofuels is still ongoing, and it is only just the beginning.
Companies such as ExxonMobil are currently undertaking research and trying to engineer a strain of algae that can be used to mass produce algae biofuels at an industrial scale. In the process of R&D of algae biofuels, problems and hurdles will arise, but hopefully in the near future, they will be overcome and solved.
Renewable energy source
Algae was initially considered as a potential source of renewable energy because as oil prices rose due to non-renewable resources becoming scarcer, there was a growing, global interest in alternative, renewable energy resources that can create higher energy content per unit volume of biomass.
Algae fits the picture, as algae feedstock can harvest more energy compared to other crop feedstocks, such as corn. Algae can produce approximately 20-30 times more oil than corn or other crops.
For example, corn feedstock can yield 400 gallons of oil per acre compared to microalgae feedstock which yields 6,283-14,641 gallons of oil per acre. Not only can oil from algae be continuously harvested, algae use light and consume carbon dioxide (CO2) waste to produce more algae, minimising CO2 in the air and surrounding environment. Besides harvesting oil from algae, the algae can also produce other products such as hydrogen gas and methane biogas under certain conditions.
The production of algae biofuels is sustainable as it provides endless amounts of resources as algae multiples over time at a rapid rate, potentially doubling its initial mass within a time span of a day.
Microalgae mass culture can be cultivated on land that is not suitable for other crops such as nonpotable saline water and wastewater. By culturing the microalgae in wastewaters, it can help remediate the wastewaters by removing nitrates and phosphates from the water and capturing sulfates and CO2.
Environmental benefits
Algae biofuels are generally safe and beneficial for the environment. When vehicles and engines are running on biofuels, CO2 emissions can be reduced close to zero.
Although algae biofuels emit CO2 in the air, algae mitigate those emissions by absorbing them back, therefore, making the net emissions close to zero. This is better than using fossil fuels as these only emit greenhouse gases into the air without doing anything to equalise those emissions. 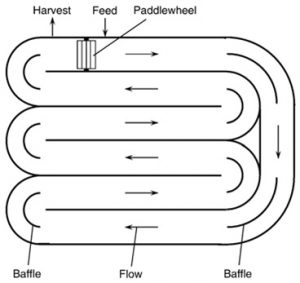 Therefore, the air quality can be improved when using biofuels. In addition, algae biofuels are less combustible compared to fossil fuels and when released into the environment through accidentally spilling, less damage is dealt to the environment compared to a petroleum spill.
Challenges
With many advantages in sustainability when producing and using algae biofuels, there are also disadvantages and challenges associated with algae biofuels. With the current technologies, processing methods, energy balance, and land occupied by algae farms, the commercialisation of algae biofuels is currently not viable on an industrial scale. With its competitor, fossil fuels, the amount of algae biofuels harvested from algae farms annually is a small fraction of the annual consumption of fossil fuels.
With current technology, 39 billion litres of algae biofuels are produced a year, which is 5% of US transportation fuel needs alone. For the past decade, prices of fossil fuels have remained low.
The cost of a barrel of algae biofuel grown at a pond scale is estimated to be $240 (€202) whereas the cost of a barrel of competing crude oil is $40-$50 (€33-€42). With a cheaper price tag for fossil fuels, there is low demand for algae biofuels at this time. The cost of production, transportation, and resources used to harvest algae biofuels are also high due to the current processes and reactor designs used to cultivate algae. 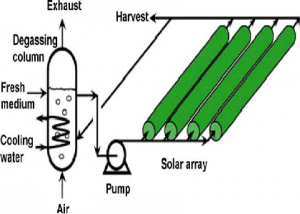 Although algae has a greater oil content per acre compared to corn, with the current methods and technology used to harvest oil from algae is not enough to meet the daily demand of fuel, making it challenging for it to be feasible at the moment with our current technology and methods. To lower the prices of algae biofuels and make production feasible, researchers and engineers must come up with new, innovative methods and technology to combat those issues and be able to produce algae on an industrial scale. As of now, microalgae biofuels do not produce a very high, desirable percentage of oil content that scientists and companies would like to see.
Another major challenge is developing a new strain that has genetic mutations that would allow the algae to yield high percent of oil content per unit biomass and grow at a high, exponential rate. Some major oil companies like ExxonMobil and Synthetic Genomics are funding research for algae biofuels to engineer new processing methods and strains of microalgae.
The current algae mass culture farm systems are not efficient and viable for mass production.
Current systems such as an open pond system and enclosed photobioreactors have their own flaws.
The open pond system is the oldest and simplest system used to cultivate microalgae. It is a shallow pond with a raceway configuration and a paddlewheel that undergoes continuous operation. This system is designed to circulate and mix the algae cells and nutrients. Although this system does not cost a lot to build, it expels a lot of resources and is wasteful. A lot of water is lost due to evaporation and growing microalgae in an open system does not uptake CO2 efficiently.
Figure 1 shows a schematic diagram of the open pond system. An enclosed photobioreactor that consists of transparent tubes was designed to overcome the issues of water evaporation and contamination in open systems. The transparent tubes allow for photosynthesis to occur as sunlight shines upon them. Enclosed photobioreactors are expensive to make and have their own disadvantages that would affect the production and cost efficiency of algae biofuels. It is difficult to scale up enclosed photobioreactors. In addition, microalgae can attach to the walls of the tubes, limiting the light penetration.
The growth of microalgae will not be at its optimal efficiency as this design requires the cultivation of microalgae to be subject to certain temperatures and light intensities. Figure 2 shows a schematic diagram of the enclosed photobioreactors. Other challenges that the commercialisation of algae biofuels face are developing a new and improved oilextraction method, developing other co-products, refining and residual biomass utilisation, and nutrient sourcing and utilisation.
When other co-products can be created along with algae biofuels, it gives companies an incentive to keep up productions because they are able to get involved in more than one kind of market. By creating co-products, the sales of co-products can alleviate production and fuel costs of microalgae. Possible co-products include guar and 2-phenylethanol glucoside.
Although producing and using algae biofuels proposes challenging issues, researchers, engineers, and major oil companies are studying new technologies, methods, and microalgae strains to overcome those challenges.
To solve the energy consumption issue of removing all the moisture from algae so that the oils can be extracted, chemical engineers have developed new jet mixer technology that allows oils to be extracted without using energy-intensive drying processes. This reactor allows the drying process to use less energy and can also get the job done quicker by extracting the oils in seconds.
Other oil extraction methods currently used can be improved by engineering new methods and strategies with the knowledge that crude algae oil is similar to regular crude oil and that the algae oil conversion to liquid fuels is similar to the processes used by petroleum companies.
Industrial production
To scale up the production of microalgae biofuel to industrial level, new system designs and models must be implemented to meet the large demand of fuels. One possible new method is to create an artificial coral reef ecosystem.
The peculiar shape of corals allows algae to cover a large surface area and allows light to shine in the areas where algae grow.
A new bioprinting technique allows algae to be transferred on to the surface of the artificial corals without dying, making the development of a large-scale artificial coral reef ecosystem plausible. ExxonMobil and Synthetic Genomics have joined forces to develop new strains of microalgae that can optimise production. Over many years, they were able to come up with a new strain that tweaks the algae genome in charge of the assimilation of nitrogen.
The tweak has allowed the algae to yield 40% oil content of its biomass.
By continuing research in finding new microalgae strains or engineering genetically altered microalgae strains, a microalga with higher percent yield of oil per unit biomass can be attained. When technological advances and efficiency gains are made, algae biofuel production can have higher biomass yields per acre and higher percent yield of oil content per unit biomass.
This would help to lower the cost of production and overall cost of the product sold as fuel. When new methods and technologies allow for nutrients and water to be utilised and recycled into the system, the production of algae biofuel will be more efficient. Figure 3 shows a detailed model of how nutrients are expected to be utilised and recycled during the production of algae biofuels.
The future of algae biofuels may seem unclear right now, but by putting more funds and time into research and development in all the different aspects of creating sustainable and highly optimal algae biofuels, industry-scale commercialisation of algae biofuels will be possible.
What can help the algae biofuel industry and market expand is a major, global shift in interest and demand for algae biofuels.
For more information: This article was written by Hillary Wong, a chemical engineer from Stony Brook University NY, and Dr Raj Shah, a director at Koehler Instrument Company. Visit: koehlerinstrument. com and stonybrook.edu/cme/