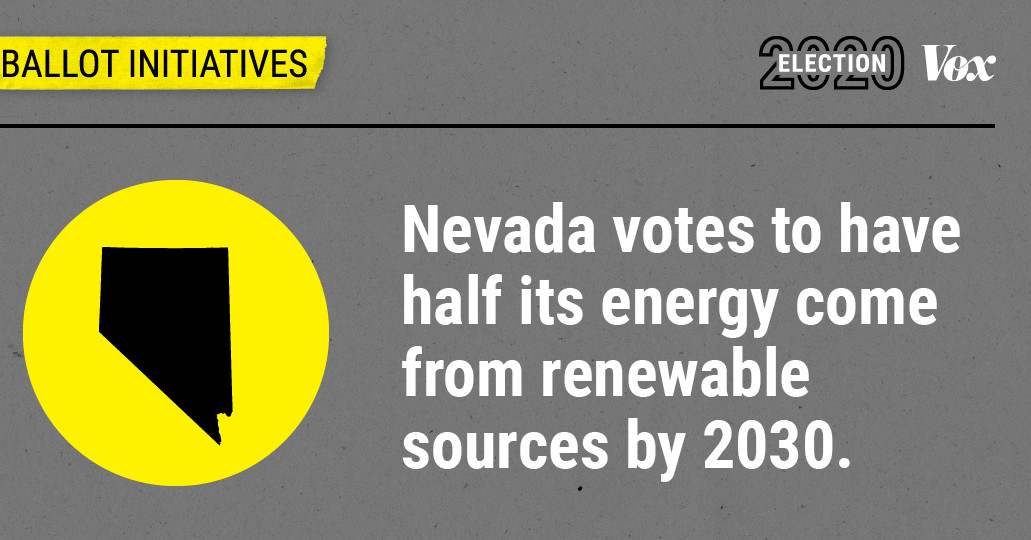 As was widely expected, Nevada voters approved Question 6 on the ballot, which amends the state constitution to mandate that the Nevada’s electricity providers shift to at least 50 percent renewable energy by 2030, according to the New York Times and the Associated Press.

The initiative is less about voters changing where their electricity comes from than putting an exclamation point on a decision they’ve already made — Nevadans passed the exact same initiative in 2018. It just so happens that, to amend the state constitution, voters must pass an initiative twice, which landed the issue back on the ballot this year.

There’s been a significant push in recent years for Nevada to quickly move toward renewable energy — one that has seen some setbacks. In 2017, the state legislature passed a bill that would have mandated 40 percent renewable energy by 2030, but then-Gov. Brian Sandoval (R) vetoed it. In 2019, the bill was bumped up to 50 percent, passed again, and newly elected Gov. Steve Sisolak (D) signed it.

The success of Question 6 means there’s now a bill and a constitutional amendment mandating 50 percent renewables.

Nonetheless, most backers will be happy to have a target that can’t be overturned by subsequent administrations, and now, the state’s target appears to be very secure.

Will you help keep Vox free for all?

The United States is in the middle of one of the most consequential presidential elections of our lifetimes. It’s essential that all Americans are able to access clear, concise information on what the outcome of the election could mean for their lives, and the lives of their families and communities. That is our mission at Vox. But our distinctive brand of explanatory journalism takes resources. Even when the economy and the news advertising market recovers, your support will be a critical part of sustaining our resource-intensive work. If you have already contributed, thank you. If you haven’t, please consider helping everyone understand this presidential election: Contribute today from as little as $3.