Current vehicles are responsible for around 30% of global greenhouse gas emissions and the most harmful of them are diesel-powered. These engines have been very popular in the last decades, especially in Europe, where they power every conceivable type of car, from tiny hatchbacks to work trucks.

But due to bad press and rigorous legislation, people are starting to look for alternatives to these types of engine,s which bring a lot of benefits in fuel efficiency and power.

To change this perception and extend the lifespan of current diesel-powered vehicles, Brunel University industrial design graduate Charlie Wilson has developed LumoFuel, a household ‘bioreactor’ that uses algae to turn CO2 and sunlight into biodiesel that can be used to run any unmodified diesel engine and is 100% carbon neutral. 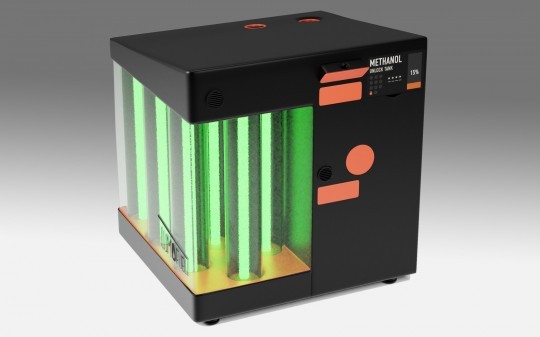 Countless experiments have been done in past decades to produce biofuel, and many of them used algae to produce them, but the biggest problem has been scaling up the designs because most large-scale prototypes ended up consuming more energy than they put out.

Wilson’s solution goes the other wa,y and rather than scaling up the process he scaled things down and built a system that uses a species of quick-growing algae called Nannochloropsis Oculata, which photosynthesizes CO2 and light into oxygen and energy.

The LumoFuel device works in day-long cycles harvesting and refining close to 50% of the algae colony in the system, while the other half takes almost 24 hours to double its mass back to full density, being ready for a new cycle.

The algae in the system are harvested with the help of an internal centrifuge that isolates it from the fluid in which is grown before the energy-dense fats are extracted and mixed with methanol (alcohol) and sodium hydroxide (a catalyst) to produce biodiesel that can be used in any existent diesel engine without having to modify any of its internal parts.

This opens a wide range of possibilities as the carbon-neutral biofuel can be used for other applications, such as heating and cooking. 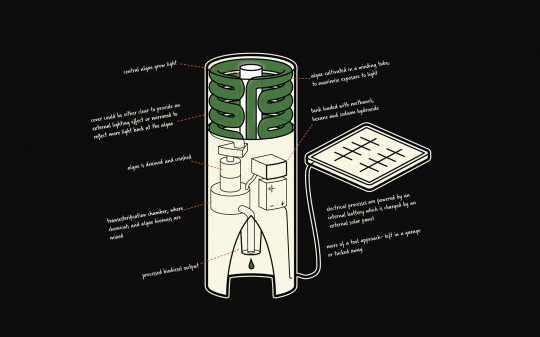 “By decentralizing production and moving it into the home, we cut out everything from the oil rig to the petrol station, because we’re just producing our own fuel with the only input being sunlight, captured using solar panels, a few bottles of very cheap chemicals, and CO2,” said Wilson, who launched the concept as part of Brunel’s annual showcase, Made in Brunel.

The byproducts of this innovative device are unused algae, glycerol, and oxygen, which can all be recycled into various products that range from food supplements and fertilizers to bioplastics.

Rather than take the CO2 directly from the atmosphere, the device uses gases that are collected from industrial flues, a technique that is commonly used by the soft drink industry.

Wilson also states that the system uses just 4kWh of power per day and small amounts of methanol and sodium hydroxide. It should, theoretically at least, be able to produce 3 liters of fuel per day, which is slightly more than the average UK family uses, for as little as US$0.18.

The LumoFuel reactor is unfortunately in the early concept stages, and although the science and design are theoretically very sound, Wilson was unable to develop a working prototype due to the ongoing health crisis.

We are rooting for him, though, as his device has the potential to revolutionize transportation and give the endangered ICEs more leverage in the battle against fully electric powertrains.