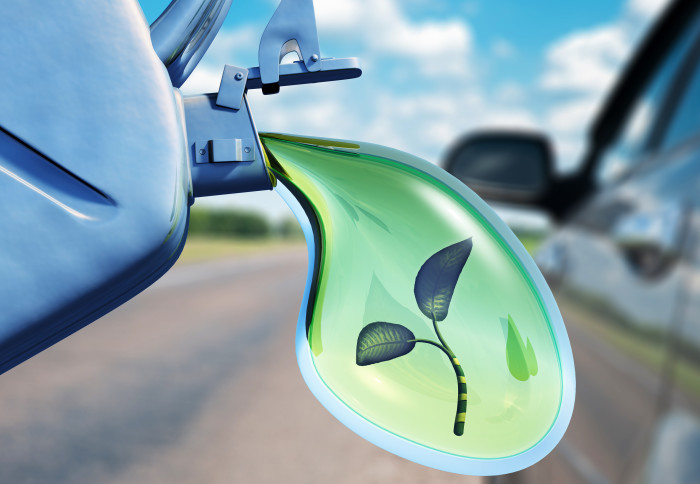 Scientists have developed a cost-effective method of biofuel extraction which could make them viable alternatives to fossil fuels in transport.

Biofuels, which are made from renewable organic matter, hold great potential as green alternatives to fossil fuels in the aviation and transport industries. However, although they have previously been commercialised for transport and power generation, they are not currently used on a large scale due to their high price, which is almost twice that of petroleum fuels.

Our new technology could help to drive down the cost of biofuels so that they eventually replace fossil fuels in transport and aviation. Professor Andrew Livingston Department of Chemical Engineering

Biofuels are more expensive than petrol and diesel because traditional conversion processes that extract fuel-grade biobutanol from biomass fermentation are energy intensive and low-yield.

Now, the Livingston Group at Imperial College London has developed a new solution to this which could revolutionise the way biofuels are produced, paving the way for their widespread use in transport and aviation.

In collaboration with bp they have developed a membrane-based extraction system which uses less than 25 per cent of the energy of current processes and produces ten times more biofuel with over 99.5 per cent purity.

The findings are published in Energy & Environmental Science.

Lead author Professor Andrew Livingston of Imperial’s Department of Chemical Engineering said: “Because they are expensive, biofuels are usually combined with petrol or diesel to make them ‘go further’. Our new technology could help to drive down the cost of biofuels so that they eventually replace fossil fuels in transport and aviation – a much happier situation for the environment and one we are all working towards.”

We can significantly reduce the cost of producing biofuels, which is an important step to driving down their overall price. Dr Ji Hoon Kim Department of Chemical Engineering

Biofuels are likely to play a central role in reducing carbon emissions and mitigating the impacts of climate change. They can reduce net carbon dioxide and particulate emissions by up to 80 per cent and are more sustainable than biodiesels because of the type of biomass used in their production.

Biofuels are produced by fermenting waste biomass and recovering the fuel from the fermented solution using an extractant. However, both biofuels and extractants are toxic to the necessary microorganisms in the solution, so can inhibit production and increase energy consumption.

In their labs at Imperial, researchers investigated the performance of several thin-film composite membranes and settled on one which can block the transport of extractant and water, allowing only the biofuel to travel through. They found that this protected the microorganisms and enabled continuous production, resulting in a ten-fold increase in productivity compared with conventional techniques.

They tested the membrane with three different extractant solvents to further fine-tune the best operating conditions. They found that the 2-ethyl-1-hexanol extractant exhibited a five times faster recovery rate, which reduced the energy consumption of the process to less than one quarter of conventional recovery systems.

Co-author Dr Ji Hoon Kim, also of the Department of Chemical Engineering, said: “By combining our ultra-thin membrane with a highly efficient extraction liquid we can significantly reduce the cost of producing biofuels, which is an important step to driving down their overall price.”

As well as being cleaner for the environment, biofuels are able to overcome issues with capacity and energy storage associated with other renewable technologies like batteries, which have so far prevented them being successfully adapted for use in aviation and long-distance transport.

Another benefit of low-ethanol biofuels is that the majority of conventional combustion engines are already equipped to use this type of fuel. However, the challenge remains to make them financially appealing for businesses to adopt on a large scale.

The Livingston Group now aims to complete a pilot- or large-scale study of their work to further validate the findings, and to refine their process even more by doing membrane modulation and operating continuous recovery with immobilised micro-organisms.

This project was funded by bp International Centre for Advanced Materials (bp ICAM).