UK ministers plan to double the amount of renewable energy capacity they secure through a flagship auction process next year as part of Boris Johnson’s plan for a “green industrial revolution”.

Up to 12 gigawatts of capacity — which ministers claim would be enough to sustain 20m electric cars in a year — will be procured through the next “contracts for difference” auction, which awards developers of renewable energy projects a guaranteed price per unit of electricity generated for 15 years.

The 12GW target, an increase from the 5.8GW of capacity obtained in the last auction in 2019, will be spread across a range of technologies, including onshore wind and solar for the first time since 2015.

The auction will be divided into three “pots”, and offshore wind will compete in its own category for the first time. It previously had to compete for contracts with other technologies such as generating energy from waste.

Government officials will also consult on how to boost the amount of money from renewables schemes that goes to UK-based suppliers, after critics highlighted that a modest percentage of funds from offshore wind goes towards yards, factories or businesses based in Britain.

Offshore wind underpinned one of Mr Johnson’s key policies in his “ten-point plan” last week for a green industrial revolution. The prime minister wants to quadruple the country’s offshore wind capacity to 40GW by 2030, up from a previous goal of 30GW, which he claimed would be enough to power every home, support up to 60,000 jobs and stimulate £20bn of private investment. 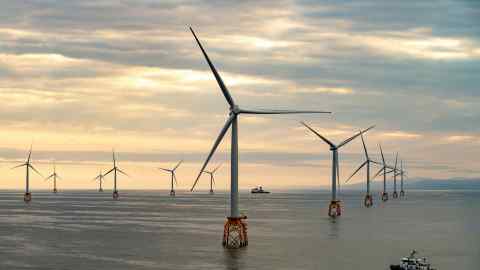 But critics have highlighted that only 29p for every £1 of capital expenditure on offshore wind farms — which includes construction and manufacturing components — goes back into the UK economy, although when development and maintenance spending are taken into account this rises to 48p. Mr Johnson has set a target of sourcing 60 per cent of content from the UK to try to counter long-running accusations that the majority of funds go overseas.

Emma Pinchbeck, chief executive of the lobby group Energy UK, said it had “long called for the next contracts for difference auction round to bring forward as much low carbon power as possible — so we strongly welcome the potential for double the capacity . . . next year”.

Under the government’s renewables auction programme, companies sell the electricity they generate on the wholesale market but receive a top-up payment if the market price is below the guaranteed price in their contract. These subsidy payments are met by consumers via their energy bills.

If the market price rises above the guaranteed price, the electricity generator pays money to the government.

Energy is the world’s indispensable business and Energy Source is its newsletter. Every Tuesday and Thursday, direct to your inbox, Energy Source brings you essential news, forward-thinking analysis and insider intelligence. Sign up here.