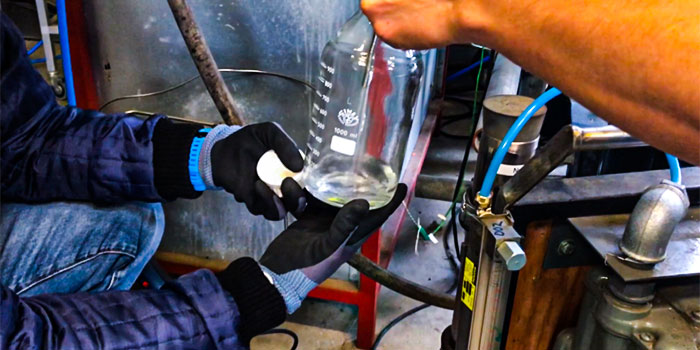 The Technical University of Denmark (DTU) is working with the Synfuel project on a way to efficiently convert biomass and wind energy into green methanol. This methanol can then be used as fuel for ships. It can also be used to replace diesel and kerosene after processing.

In Denmark, renewable energy is currently primarily produced from biomass and wind turbines. The project’s researchers believe that there are still few applications that are suited to this type of energy.

Professor Peter Vang Hendriksen of DTU Energy: “Wind energy and energy from biomass is difficult to store. Both energy sources cannot yet be used for aviation or maritime transport. As a result, we still use a lot of fossil fuels in these forms of transport. This makes it difficult to make the transport sector CO2-neutral.”

Through this project, the university is offering a solution for storing energy from biomass and wind sources. It can then be used to make fuel for aircraft and ships, among other things. This technology is being developed with funding from the Innovation Fund Denmark.

Development of the fuel

Researcher Jesper Ahrenfeldt of DTU Chemical Engineering: “The Synfuel project uses the hydrogen in a Solid Oxide Electrolysis Cell (SOEC) to make a liquid fuel.” SOEC is a cell in which electrolysis takes place. Electrolysis is a chemical process that breaks down substances. In this case, the cell breaks down water molecules into hydrogen and oxygen.

Synthesis gas is mixed with hydrogen which is then converted into fuel. Synthesis gas is a mixture consisting of hydrogen gas and carbon monoxide that is released during the gasification of biomass. Straw was used for this in this project. The entire process is powered by wind energy.

“We are extracting more biofuels from biomass sources. And we can use power from wind turbines, among other things, to produce fuel for heavy transport.” The system using the combined technologies is set to be further scaled up. The researchers expect that the technology will eventually be integrated into Denmark’s energy systems.

Researchers from DTU Management have analyzed the potential of the project. They concluded that it is only a matter of time before the technology will deliver results of lower carbon emissions in Denmark.