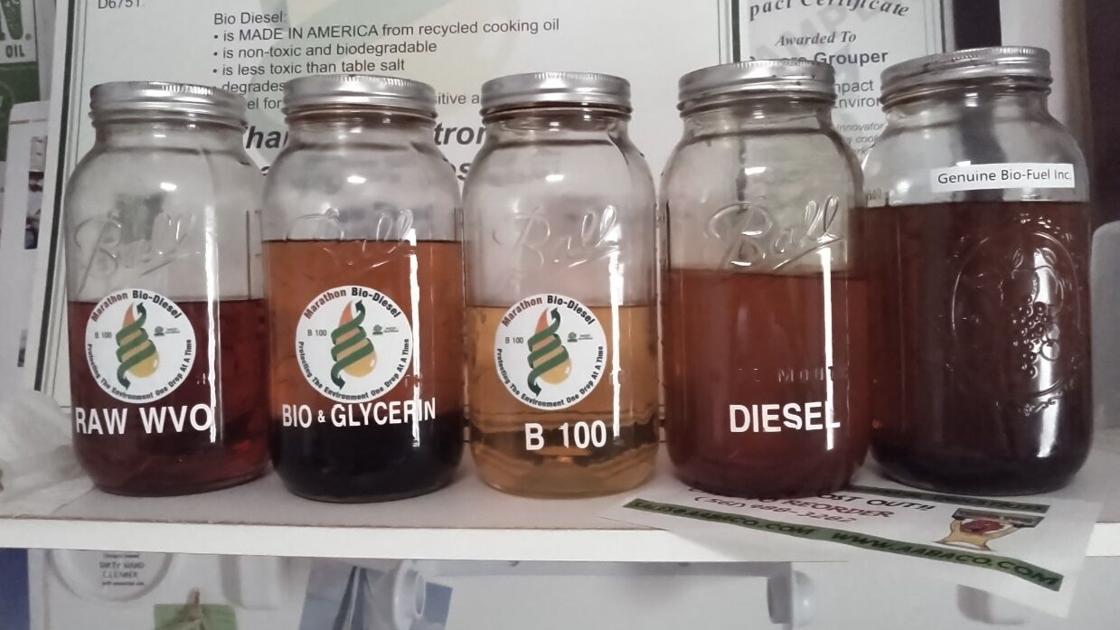 MARATHON — Despite its environmental benefits, biodiesel hasn’t generated the kind of energetic response hoped for by one local entrepreneur.

Jeff Lillie, a former commercial fisherman and machinist, founded Marathon BioDiesel Inc. about 15 years ago at Coco Plum Drive and U.S. 1 because he cares about the Florida Keys National Marine Sanctuary and believes more diesel engine owners should be using biodiesel fuel for its myriad benefits including protecting the Keys’ unique marine environment and enhancing engine longevity.

Marathon BioDiesel collects used vegetable oil from restaurants and processes it into biodiesel, a biodegradable, non-toxic, environmentally-friendly fuel for diesel engines. Biodiesel is a replacement or supplement for diesel fuel. It creates 80% less carbon dioxide and 100% less sulfur than diesel fuel, said Lillie.

A Keys resident for 41 years, Lillie said his business has hit a crossroad due to Hurricane Irma in 2017 and COVID-19 in 2020, but also because it is hard to convince people to change their habits and adopt new ideas and ways of doing things, even if those are better for the environment.

Despite various positive press through the years and even a phone conversation with Donald Trump Jr. about an appointment to a small business congressional committee promoting “green” ventures, Lillie’s business is static after years of trying to educate boaters and make his biodiesel fuel available at more marinas in the Keys.

“I see the devastation from two-cycle engines,” Lillie said.

Tina Shannon at Burdines Waterfront Marina & Bar and Grill said the marina used to carry biodiesel fuel but it was not very popular. Some users claimed it negatively affected their engines, she said.

Disappointments more than successes have been the machinist’s experience in the Keys. Lillie hoped the Key West tourist trolleys from Old Town Trolley Tours would switch to running on biodiesel. Then, he said, the drivers could point out to passengers as they rolled by various restaurants those which donate used cooking oil to be transformed into biodiesel to fuel for the trolley. Thus far, though, that push for clean transit promotion has not moved forward.

What had the most traction at the business’s start was MPODs, or the clean diesel Mobile Processing On Demand system.

“This is a community-based, turn-key, waste-to-fuel solution that is easy to operate and profitable,” Lillie said. “We manufacture high quality mobile processing operations that convert used vegetable oil into ASTM-certified biodiesel to be used in the community. Our staff has a combined 80 years of experience in chemistry, fuel composition, fleet operations, engine design and the legislative matters that drive the alternative fuel industry. We have combined these strengths to develop a solid program that involves training, education and best practices to ensure the success of customers.”

In the beginning, there was a whole circle of life at the Marathon enterprise. Interaction over worm farming generated interest, for example. As well, a January 2012 Key West Citizen article listed 25 entities donating used oil to Marathon BioDiesel. Now, the entrepreneur hopes someone will buy into his Marathon facility and assist in the manufacture of MPODs.

However, as a pandemic-related option, Lillie has started producing glycerin hand pumice and cleaner. Glycerin is a major byproduct in the biodiesel manufacturing process. In general, for every 100 pounds of biodiesel produced, approximately 10 pounds of crude glycerol are created, according to farm-energy.extension.org.

Lillie’s website contains several videos about the biodiesel process and can be found at marathonbiodiesel.com.