Clearway Energy (NYSE:CWEN)(NYSE:CWEN-A) supercharged its dividend in 2020, boosting it an eye-popping 59%. But it has plenty more growth ahead after it added several new power sources over the past few months.

It already has enough power to increase its dividend by another 8% next year. Meanwhile, it recently added a new power source that should keep its longer-term dividend growth plan fully charged.

Details on the latest deal

Clearway Energy has agreed to co-invest in a 1.6 gigawatt (GW) portfolio of renewable energy assets developed by its parent, Clearway Energy Group. It’s partnering on the transaction with Hannon Armstrong Sustainable Infrastructure Capital (NYSE:HASI), a real estate investment trust (REIT) focused on investing in climate solutions. Clearway Energy will invest about $214 million through 2022, while Hannon Armstrong is making a preferred equity investment that will total roughly $663 million through 2022. 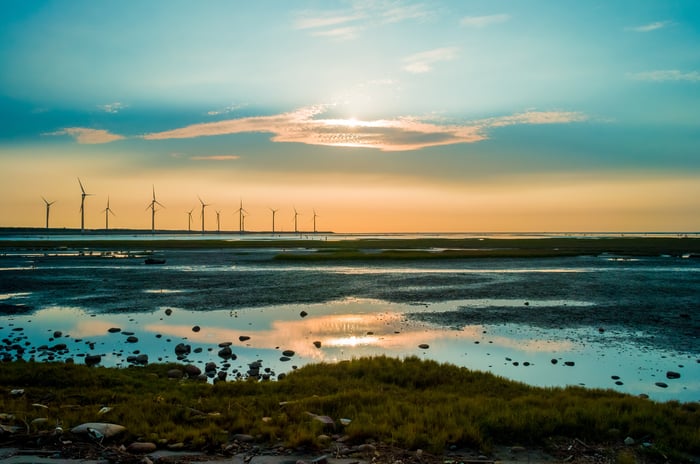 The portfolio consists of the following assets:

Clearway has already closed its investments in Rosamond Central and Mesquite Star, acquiring a 50% cash equity interest in the former and increasing its stake to 50% in the latter for $23 million. Meanwhile, Clearway Energy Group expects to start construction on Mesquite Sky and Black Rock in the coming weeks. Clearway will close these 50% cash-equity-interest transactions upon completion in the second half of next year. The final three projects are on track to start up in 2022 when Clearway would close those acquisitions.

The staggered closing timeline is noteworthy. It gives the company time to finance these future acquisitions while allowing it to participate in the associated cash flows immediately upon closing the transactions. As a result, Clearway believes the contributions to its cash available for distribution (CAFD) will be immaterial in 2021 while growing to about $9 million in 2022, before reaching $20 million on an average annual basis at the beginning of 2023 before the impact of corporate financing costs.

That enhances the visibility of the company’s long-term outlook. As of the end of the third quarter, Clearway anticipated that it would generate $310 million of CAFD this year and $325 million in 2021. Meanwhile, due to the timing of transaction closings and project start-ups, it has some embedded growth as it expects its pro forma CAFD to reach an annualized $345 million.

But the company has since enhanced that outlook by agreeing to acquire an additional stake in the Agua Caliente solar project for $202 million. That deal will add an incremental $20 million of annualized CAFD before factoring in financing when it closes early next year. Now, it’s further bolstering its pro forma outlook with this co-investment transaction with Hannon Armstrong.

There’s plenty of power remaining beyond these recent transactions. Clearway Energy Group has a 9.4 GW pipeline of projects, including 5.4 GW in late stages that could enter service by 2023. The bulk of those projects (2.8 GW) are targeting a 2023 in-service date, most of which the company hasn’t yet offered to Clearway Energy. Because of that, it has lots of growth potential ahead if it can continue securing funding for additional drop-down transactions with its parent. Thus, it seems increasingly likely that the company can achieve its long-term target of growing its 3.9%-yielding dividend by 5% to 8% per year.

A great option for dividend investors

Clearway Energy is becoming a dream stock for income-seeking investors. It supercharged its payout in 2020, boosting it three times during the year and by 59% overall. Meanwhile, it has enough power to increase it by around 8% in 2021 and has already started charging its growth engine for 2022 and beyond. That increasing growth visibility powered by renewable energy makes it a great stock for dividend investors to consider buying and holding for the long haul.