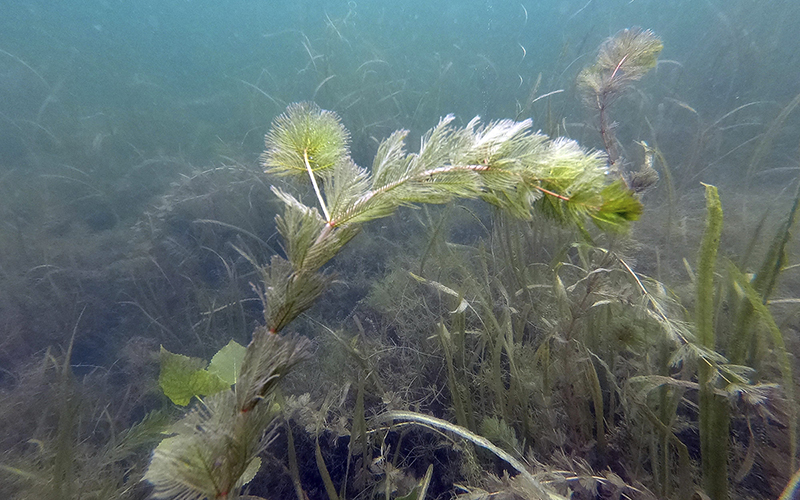 In the Tahoe Keys—a neighborhood of houses and artificial lagoons with easy boat access to Lake Tahoe, one of America’s least polluted lakes—the water is not blue but a murky mass of green, filled with invasive weeds. Dogs have died from swimming in the canals, which is prone to toxic algae blooms. Activists want to wall the Keys off from the lake.

The neighborhood association is proposing to tackle the problem with herbicides, which have never been used before in Lake Tahoe. The lake enjoys an Outstanding National Resource Water designation, granting it special legal water quality protections that environmentalists say would be violated by the use of herbicides. In order to justify their use, all other options must be exhausted, and the most obvious solution has yet to be tried: Eliminate the conditions in which the weeds grow and restore the area to natural and beneficial marsh.

The dispute is pitting private property owners against environmental activists in a fight over whether boat access for homeowners should shape policy around the ecological health of one of America’s most spectacular lakes.

Before the Tahoe Keys was built in 1960, the 1,600-acre Upper Truckee marsh was the largest wetland in the Sierra Nevada. The bog provided habitat for birds and fish and also filtered water as it flowed into the lake. When the Keys was built, it split the marsh in two, remaking half of the wetland to accommodate boats and large houses rather than animal life. The Keys were a different environment than anything else in Lake Tahoe and more prone to invasive species. Dennis Zabaglo, aquatic resource program manager for the Tahoe Regional Planning Agency, says the Keys are likely the first place Eurasian watermilfoil was found in the lake.

“That’s pretty much ground zero for us,” Zabaglo said. “Because of the ability for these things to spread, the Keys is definitely the highest priority for the rest of the lake.”

The warm, stagnant water, combined with stormwater runoff from South Lake Tahoe, is a breeding ground for invasive weeds, which have gotten so thick boats can no longer pass through. The neighborhood has managed to keep the passage clear by cutting the weeds back and hauling them away but is now looking to take more extreme measures: a one-time use of herbicides, combined with UV light treatment and other nonchemical methods, to get things back to a place where chemicals won’t be needed.

Tobi Tyler, an executive committee member of the Toiyabe Chapter of the Sierra Club, says just knocking the weeds back ignores the problem.

“You’ve got these perfect conditions for weed explosions of growth. We think that by putting in herbicides, you’re not solving the problem,” Tyler said. “It’s putting a Band-Aid on it and hoping the problem miraculously goes away.”

If the conditions for growth are still there, Tyler says, the weeds will inevitably come back. And she fears the application of herbicides even one time will open the door to future use. Tyler says that she cannot find any examples of treatments where herbicides have been effective after a single use.

Tyler and the Sierra Club are proposing another solution: Wall off the Tahoe Keys and turn the lagoons back to native marsh, which would filter out pollutants instead of creating them.

“We want to protect the lake from the Keys, and a barrier is the short-term solution to prevent any more weeds from getting into the lake,” Tyler said. “That’s the only real solution, because otherwise you’re going to have an ongoing problem. It’s a system that’s always going to have a problem with these weeds.”

Ortiz says the weeds were first reported in the Tahoe Keys lagoons in the 1980s and first reported in the lake proper in 1988—just outside of the Keys. When boats leave the Keys, they risk bringing patches of weeds with them, stuck to hulls or propellers. A private problem has become a public one.

The Lake Tahoe weeds are an especially pernicious problem. Once established, they alter the lake environment, making it more suitable for their growth. As the first generation decomposes, it leaves nutrients in the water, making it easier for new weeds to grow. Those nutrients also fuel toxic algae blooms and sienna bacteria.

Zabolgo says fears of herbicides are exaggerated and that the majority of the water quality impact will come from the refuse of the weeds themselves, which has the potential to create toxic algae blooms if not handled properly, rather than the weeds.

“The cost of doing nothing, in this case, is the worst outcome,” Zabolgo said.

While all parties agree that the weeds are a problem, their lists of grievances, and solutions, vary. Edward Ortiz, from the Lahontan Water District Public Affairs Office, listed the problems the weeds are causing in an email: “impaired navigation of vessels, potential health and safety risk associated with entanglement of swimmers in aquatic vegetation and lack of visibility of submerged swimmers, impairment of fishing and aesthetic quality, and increased predation of native fish species by invasive fish species.”

Tyler thinks that if the homeowners will just park their boats at the marina, the rest of the problems can be easily fixed. By walling off the Keys, the weeds could no longer make it to the lake. By turning the lagoons back to marsh (not demolishing the houses, Tyler emphasizes), the Keys would filter water before it enters Lake Tahoe, helping keep the lake clear and clean rather than serving as a spawning ground for weeds. By Lahonta’s own estimates, the herbicide treatment will be a temporary measure.

The half of the Upper Truckee marsh left undeveloped when the Keys was built has grappled with its own ecological problems since the marsh was bifurcated. The once meandering streams were straightened and put into channels, and a lagoon lingers from a defunct plan to expand the Keys, with an aquatic weed and invasive fish problem similar to the Keys. But on public land, it is easier to put the ecosystem first.

“There’s a similar problem in that lagoon as the rest of the Keys, but it’s more manageable because it’s on state property so we can essentially just make it go away by disconnecting it from the Keys and reconnecting it to the river,” Stuart Roll said. “We’re fortunate to not have those constraints.”