The deal for 9.9 per cent of Plug Power comes as SK Group, South Korea’s third-largest conglomerate, aims to slash its carbon emissions by two-thirds over ten years and plots a transformation away from fossil fuels.

The investment will make SK, one of Asia’s top producers of oil and electric vehicle batteries, the largest shareholder in Plug Power.

The South Korean group plans to form a joint venture with the US company and provide hydrogen fuel cell products to Asian markets, including China and Vietnam.

Shares in parent company SK Holdings gained as much as 7 per cent in Seoul on Thursday morning. Plug Power’s stock jumped 20 per cent in extended trading in the US.

The investment comes amid booming demand for green energy as global carmakers shift away from petrol engines to electric batteries and hydrogen power.

SK Group has worked to carve off carbon-intensive businesses and focus on its multibillion dollar bets across electric vehicles, biotechnology and renewable energy. 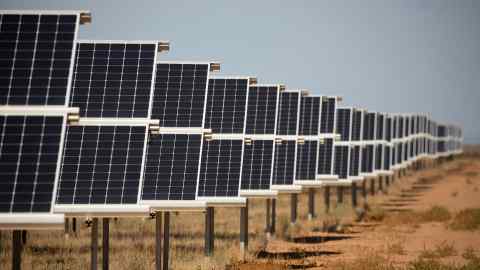 The group views hydrogen as one of its new growth drivers as South Korea seeks to become a global leader in the development of the alternative energy source. SK aims to produce 30,000 tonnes of hydrogen in 2023, rising to 280,000 tonnes by 2025.

President Moon Jae-in has promised to make South Korea carbon neutral by 2050. He also wants the country to build 6.2m hydrogen vehicles and generate 15GW of fuel cell power by 2040, which could yield $40bn of economic activity.

Plug Power makes technology important to fuel cell and hydrogen production. The company, which has a market value of about $14.7bn, has provided 40,000 fuel cell systems for EVs and built hydrogen refuelling stations across North America.

It recently entered the hydrogen-powered truck market and is trying to diversify into drones, aircraft and power plants. Plug Power is also planning to expand into Europe, which is keen to build a hydrogen ecosystem.

South Korea’s Hyundai Motor and Japan’s Toyota are among the leaders in hydrogen-powered vehicles, but the carmakers face challenges to popularising the technology in high production costs and a lack of refuelling stations.

Hydrogen, which can be transported and stored relatively easily, could help decarbonise industries such as long-haul transport and steelmaking if it becomes cost-competitive.

Energy is the world’s indispensable business and Energy Source is its newsletter. Every Tuesday and Thursday, direct to your inbox, Energy Source brings you essential news, forward-thinking analysis and insider intelligence. Sign up here.