If you’re thinking about getting solar panels on your home or business, the local wastewater authority is probably not the first place you would call. But a wastewater agency in Centre County that’s looking to help more people go solar might be a good place to start.

“They are driving the piles down into the ground, to a point where they have enough stability so that when the wind blows the solar panels are going to stay in the ground and not blow away,” said Cory Miller, executive director of the University Area Joint Authority, which handles wastewater treatment in the State College area.

Miller was standing next to solar energy field under construction on what had been a hayfield just outside of State College. The project on authority land is the second phase of its solar array.

“We’re doing this basically to save people money,” Miller said. “We found that by doing solar, we will in the long run save several million dollars on energy. So, we get to go green and save money at the same time.”

When this part of the project is up and running, UAJA, as it’s known, will be getting about 80% to 85% of its power from solar annually.

But it also means the authority is going to max out on how much solar power it can generate and get credit for — about 5 megawatts. In Pennsylvania, state rules limit the size of solar arrays.

“So, the only way for us to continue to do solar is to go do it on other people’s property,” he said. “So, we’re looking to hopefully figure out a way to legally go fund projects on peoples’ homes and businesses and nonprofit organizations to help them make the leap to solar.”

Miller said the authority would essentially act as a bank for someone to get solar panels on their roof. That includes customers who don’t have the money to pay for the work upfront. For its part, UAJA is looking at breaking even.

And it fits in with the Centre Region’s own goals for cutting greenhouse gas emissions.

The plans are for a pilot project of about 300 homes, businesses and nonprofits. There’s already interest.

“I’m definitely No. 1 on the list. I think I called him like six hours after they had introduced the idea,” said Penny Eifrig. She had been getting ready to sign a contract to have solar panels put on her roof when she heard about the UAJA project.

So, she called her contractor back.

“Rather than say, ‘Hey, I’m ditching you for somebody else,’ I said, ‘Here’s a chance for you to expand your business,’” Eifrig said.

Under the plan, UAJA will finance the up-front costs for a contractor to install the solar panels. That could typically cost $10,000 to $15,000 dollars.

For customers who opt in, a separate line on their UAJA bill will be for the solar panels. At the same time, they should see their power bills go down. And, the panels would be paid off in 20-25 years or so.

“I think it’s a wonderful project. Going forward, we have so much to do and very little time do it, so everything we can do right now is super-important,” Eifrig said.

UAJA’s plan is new enough that several environmental and government organizations weren’t familiar with the details. But they do see the benefits to going solar.

Rob Altenburg is director of the Energy Center at Citizens for Pennsylvania’s Future. He said solar is cheaper than it was a couple years ago. And for large-scale projects, it can offer protection from rising fuel costs in the future.

Aside from the siting, the biggest roadblock to solar panels is having the capital to invest.

“When you’re seeing businesses that are looking at novel ways to assist people in financing solar and see the benefit from it, that’s just great,” Altenburg said.

There also could be something in that for the authority: The project could mean it gets what are known as nutrient offset credits.

Pennsylvania is one of the states required to cut runoff to the Chesapeake Bay Watershed. The pollutants — like nitrogen — come largely from agriculture, along with urban and suburban runoff and wastewater treatment plants. They damage the water quality in the bay and the animals that depend on it.

“What we’re hoping is that we will be able to win our argument with the state of Pennsylvania that putting solar panels in decreases the amount of nitrogen discharged from conventional fossil fuels, which means we’re doing this for water quality as well,” Miller said.

Campbell said runoff from developed areas and ag has grown.

“Overall, Pennsylvania is significantly behind in meeting its Bay commitments, particularly in addressing runoff from agricultural areas and urban and suburban stormwater runoff,” he said.

But, one area of success has been cutting nitrogen from wastewater treatment plants. And UAJA in particular is recognized as state-of-the-art.

In fact, Campbell said wastewater treatment plants, over the last 10 years, have reduced their pollution load by roughly 31%. 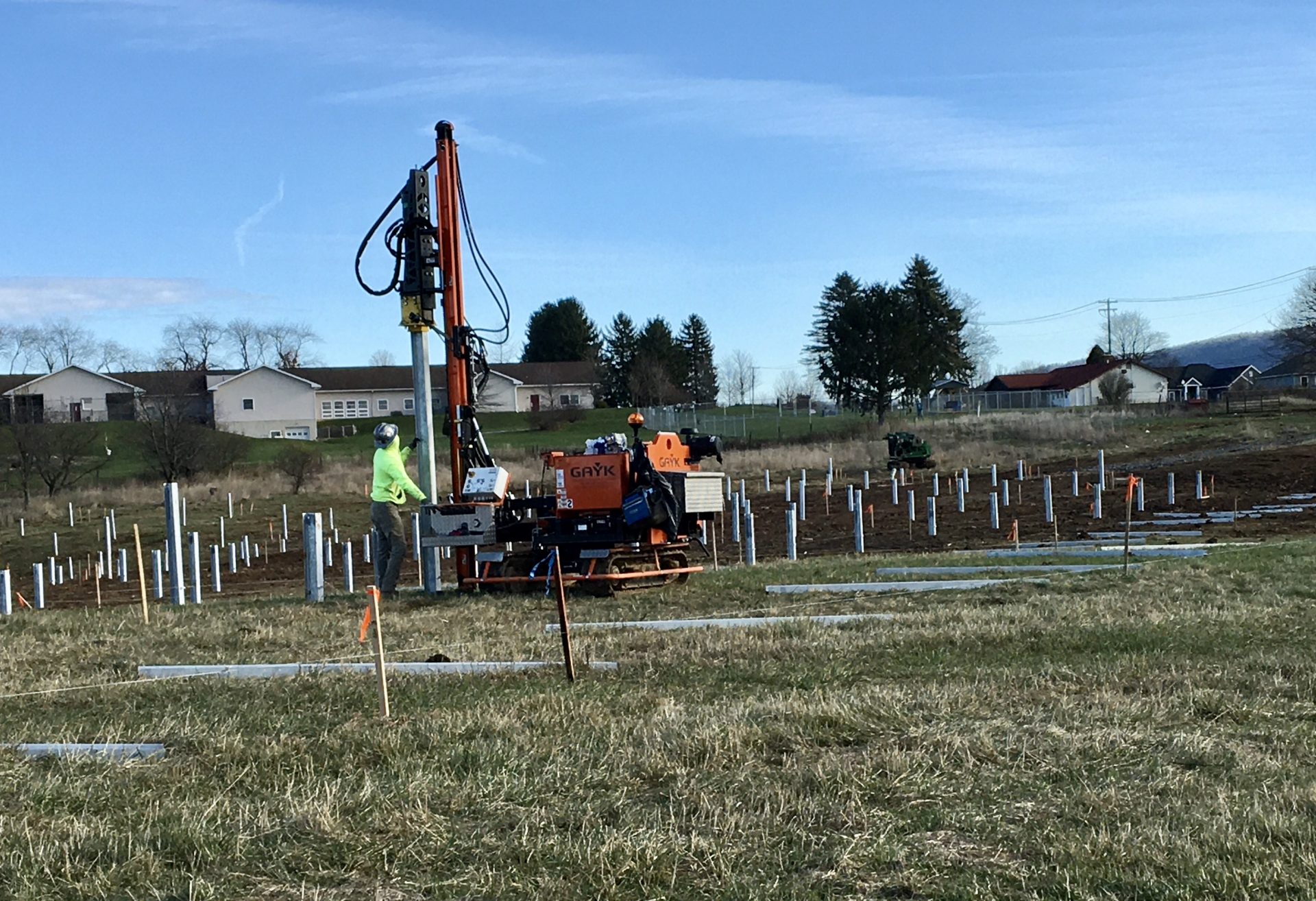 Work on the second phase of the University Area Joint Authority’s solar array project outside of State College.

UAJA is still working through the legal and technical details. But Miller said they don’t own the idea.

“Anybody can take the idea we came up with and apply it in their own community. All they have to do is knock on the door of one of their local authorities,” he said.

The proposal has been shared with the State College area governments, and so far, the response has largely been positive. It will need to get formal approval from the UAJA municipalities.

Eifrig, who’s waiting to get panels installed on her home, said along with the environmental benefits, there are perks.

“I have a hot tub that I don’t use, because I always feel bad about wasting that much energy to go in a hot tub every once in a while,” she said. “But, if I had energy being produced on my roof, I would use my hot tub.”

The solar panel pilot project could kick off this summer.