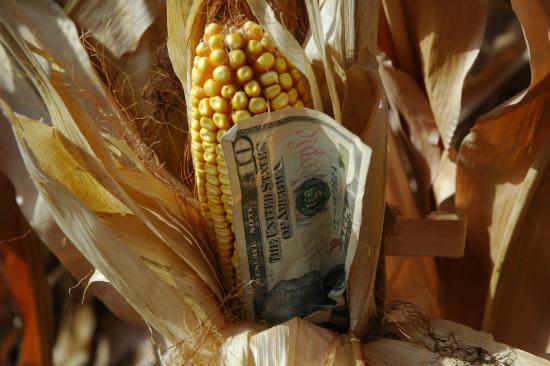 Corn futures fell to a two-week low as the market continues to digest Tuesday’s World Agricultural Supply and Demand Estimates (WASDE) report from the U.S. Department of Agriculture.

Wheat futures, meanwhile, rose as investors continue to watch developments in Russia, where the government said this week it approved an export-tax system for grain exports in a bid to keep domestic food prices down.

The export tax may send importers of the grain to the U.S. to secure supplies. U.S. ending stocks of wheat are seen at 836 million bushels, just above expectations for 834 million bushels and the previous month’s 836 million.

Corn for March delivery fell 3½¢ to $5.31 a bushel overnight on the Chicago Board of Trade.

Ethanol output rose to the highest level in three weeks while inventories declined, according to the Energy Information Administration.

Production of the biofuel rose slightly to an average of 937,000 barrels a day in the week that ended on Feb. 5, the EIA said in a report.

That’s up from 936,000 barrels a day, on average, the previous week and the highest level since the seven days that ended on Jan. 15.

In the Midwest, by far the biggest producing region, output averaged 895,000 barrels a day, up from 894,000 barrels a week earlier. That’s also the highest in three weeks.

Stockpiles, meanwhile, declined week-to-week, dropping to 23.796 million barrels in the seven days through Feb. 5, the EIA said in its report.

3. Winter Weather Hitting Much of Midwest East to Mid-Atlantic Region

Weather maps are showing lots of activity in the Midwest and the Ohio River Valley today as winter storms batter parts of the country.

In central Nebraska, a winter weather advisory has been issued starting at 6 a.m. local time as several inches of snow are expected heading into the weekend, according to the National Weather Service.

From 2 to 4 inches of snow are expected Friday  with more falling on Saturday, leading to total accumulations of up to 7 inches, the NWS said in a report early this morning.

In northern Iowa, southeastern Minnesota, and western Wisconsin, windchills are expected to drop to -25°F. to -30°F. today. The windchill advisory is in effect until 10 a.m. local time, the NWS said.

Ice storm warnings have been issued for a wide stretch of land spanning from southern Arkansas northeast into the Mid-Atlantic region of the U.S.

In parts of Arkansas, freezing rain will continue throughout the morning with sleet mixed in, the agency said. Ice accumulations in the area are expected to be around .25 inch.

“The areas with most ice will be across southern into southeast sections of the area,” the NWS said. Farther north ice amounts of less than .25 inch are now expected mainly due to sleet accumulations with upwards of .25 to .5 inch of sleet.