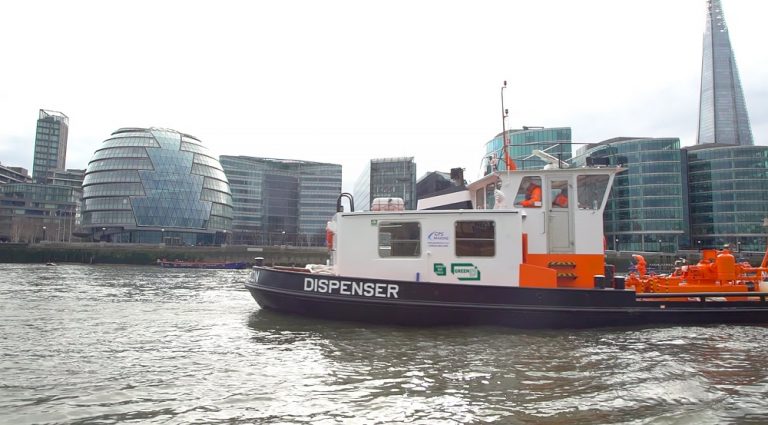 A new collaboration between the biggest commercial vessel operator on the Thames and Green Biofuels will see increased usage of biodiesel.
GPS Marine and Green Biofuels, the UK’s leading provider of clean advanced fuel GreenD+, will help reduce London’s carbon emissions and boost the Thames’ drive to clean up and reduce pollution.
GPS Marine and Green Biofuels commenced their partnership last year by fuelling the Thames Tideway Tug with GreenD+.
This tug pulls barges to one of London’s largest construction projects – the new ‘Super Sewer’.
Now, their new fuel bunker barge, the Dispenser, will not only be refuelling the tug delivering tunnel lining ring segments for the Thames Tideway central section, but also a growing number of other commercial vessels along the river.
The Dispenser will supply GreenD+, which is the lowest emission diesel fuel available on the river.
Consequently, cleaner fuels used by river vessels can replace HGVs on London roads and deliver a huge reduction in emissions and boost air quality.
The Dispenser, a refurbished barge, will become London’s premier green floating fuel station and will help make an annual carbon emissions saving equivalent to 3,861 tonnes of CO2e.
Green Biofuels has worked in conjunction with GPS Marine and Stolthaven Terminal to allow the Dispenser to load directly from the terminal to the river, removing the need for on-road delivery tankers in the supply chain to fuel river vessels.
John Spencer, CEO of GPS Marine, added: “We are both proud and excited to be working with the passionate team at Green Biofuels. Using GreenD+, we don’t have to wait for government policy or intervention, we can make a difference right now.
“Not only do we want to see a cleaner and greener Thames, but removing the need for on-road fuel delivery vehicles also helps to clean London’s air. After moving our entire Thames based fleet to a drop-in advanced fuel, we hope to set an example for other fleets to take environmental responsibility into their own hands – and put words into action.”
Magnus Hammick, COO of Green Biofuels, said: “GPS Marine is backing up their commitment to reducing air pollution and carbon emissions on the Thames with real action, and that deserves celebrating. We’re very proud to be partnered with one of London’s foremost river operators in helping them achieve their environmental goals, and becoming aligned with the aims of the Port of London Authority to achieve net zero for the river too.”