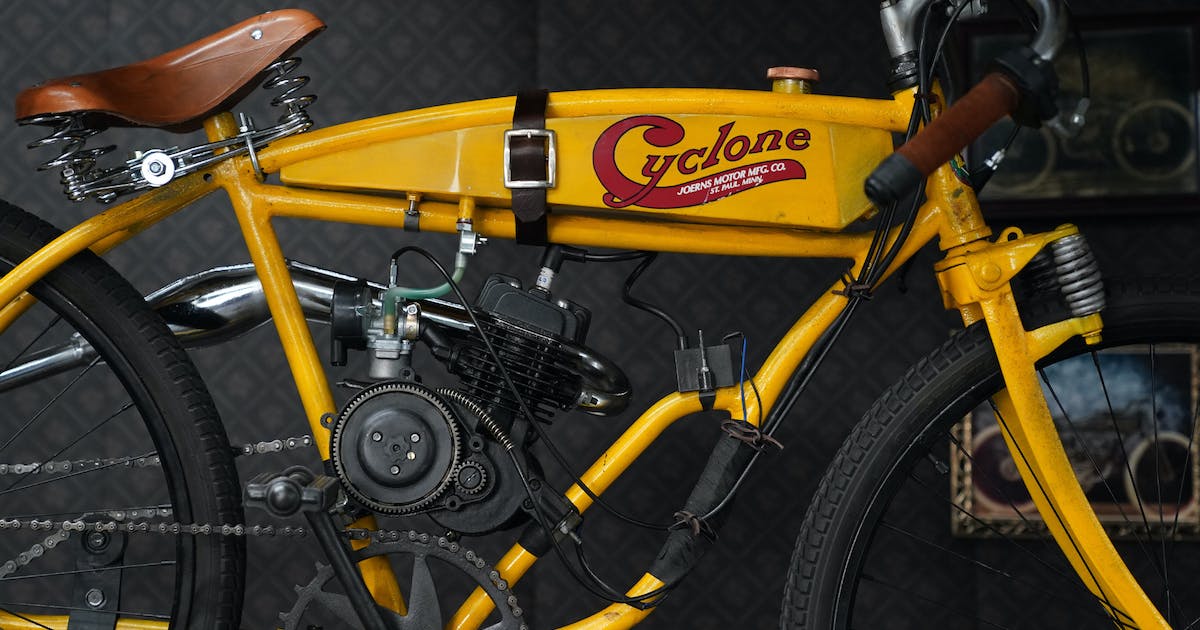 It’s not surprising that sales of e-bikes are taking off.

The bikes, which are equipped with electric motors that make pedaling easier or even unnecessary, have become a convenient, easy-to-use, environmentally friendly transportation alternative to cars or even conventional bikes.

But are they cool? Would you ever think of an e-bike as a ridable work of art? Would Steve McQueen have ever been seen pedaling one?

He might have if it had been created by a couple of Twin Cities maker types who are building what they call “bespoke motovelos.” They’re mounting electric or piston engines on bicycle frames and adding vintage parts and design elements to produce pedalable homages to famous motorbikes of the past.

The bikes are designed by Minneapolis resident Jeremy Clark, in collaboration with his friend, Johnny Murphy, a Roseville inventor and entrepreneur.

The two are serial tinkerer artists who have exhibited offbeat projects at places like Northern Spark, Art-A-Whirl and the Mini Maker Faire.

Their MotoVolta line of bicycles is a way for them to celebrate their love of historical motorcycles as mechanical works of art while using the bicycle as a platform that’s more environmentally friendly and more accessible.

One of their custom two-wheelers is a model that Clark and Murphy called the Alchemy. They also call it a “tribrid” bike since it has three forms of propulsion: You can pedal it, use a little piston engine equipped with a performance enhancing “boost bottle,” or engage the modern electric motor mounted in the front hub.

A cruiser bike frame — with low-set handlebars, a bullet fairing and a streamlined gas tank that holds both the actual gas tank plus the electric motor battery and controller — completes a look meant to evoke a 1960s-era British cafe-racer motorcycle.

Another model with a steampunk vibe looks like one of the earliest examples of motorcycles from more than 100 years ago, which were essentially bike frames with an engine bolted on.

In this case, Clark mounted a tiny 50cc-equivalent two-stroke engine to an old-fashioned bike frame. He added a cylindrical gas tank held to the frame with leather straps and a carburetor with a copper fuel line and a vintage glass sediment bowl. Wooden handlebars, a leather seat and frame bag and an old-fashioned dynamo headlamp complete the retro feel.

Like any bike, you crank the pedals to get moving, but when you engage the engine it becomes a moped, able to get up to about 25 miles an hour.

A bright yellow bike designed by Clark with a one-cylinder engine has a red logo labeled “Cyclone” and “Joerns Motor Mfg. Co. St. Paul, Minn.” on its gas tank.

It’s a tribute to a famous board track racing motorcycle made by a short-lived St. Paul company in the early part of the 20th century. One of Joerns’ 1915 Cyclone motorcycles that had been part of actor Steve McQueen’s collection was sold at auction in 2015 for a record $775,000.

Clark said he actually got a taste of the board track experience of a century ago by riding one of his motorized bicycles on the wooden National Sports Center velodrome in Blaine before it was torn down last year.

Clark has an art school background, experience as a furniture designer and a day job as a senior designer at Target Corp. But he’s also been a longtime bike, motorcycle, moped and scooter enthusiast.

He said he built his first motorized bicycle about 10 years ago and has sold about six of them.

Some of his other motorized bicycles include ones modeled after vintage Harley-Davidson and Indian motorcycles. He made a yellow and green John Deere-themed motorized bicycle as a 70th birthday gift for his father, a former farmer and a fan of John Deere lawn mowers.

Clark and Murphy also worked on a 1970s-influenced lowrider bike with an electric engine, a leather battery case and a fake raccoon tail dangling from the handlebars. And they modified an old pedal-powered Schwinn with a rack to carry an electric-powered longboard skateboard.

Some of their bikes have been purchased by businesses that use them as cool display objects. But they’re all ridable.

“We want to make sure they’re functional,” Clark said. “It is an experience you can have with the art.”

Their piston-engine models will feel familiar to anyone who rode a moped from the 1970s, with response, vibration and buzz of a little gas two-stroke engine that’s peppy for its size but maxes out at about 25 mph. Their electric-drive models have the surprising, “Oh-it’s-on!” silent acceleration similar to that of an electric scooter.

Clark wants to make his models with piston engines more environmentally friendly by running them on biofuels. He’s growing algae in his basement with the hopes of creating a fuel that will burn cleaner than fossil fuels in his two-stroke engines and can be produced in enough volume to support microcommuting.

“An algae turbine bike is our next build,” he said.

That’s an admittedly “crazy” idea that Clark and Murphy have to repurpose an automobile turbocharger unit and turn it into a bicycle turbine engine powered by biofuel.

Clark said their motorized bicycles are an answer to what he sees as a “toxic masculinity” that is sometimes seen in mainstream motorcycle culture. In other words, less speed, less noise, more environmentally friendly, more accessible. But still cool.

He compares what he and Murphy are doing to a California company called Super73 that makes pedal-equipped two wheelers that resemble 1970s era mopeds, except they have electric engines.

Clark and Murphy recently showed off a batch of their bikes at a pop-up exhibit in Murphy’s shop in the Midway area of St. Paul. Their hand-built machines range in price from $2,500 to $5,500.

The bikes will be on display at Murphy’s workshop Mondays through Fridays through June at 809 Carleton St., St. Paul. For more information, e-mail jem.a.clark@gmail.com or see Clark’s Instagram page at jem.a.clark.