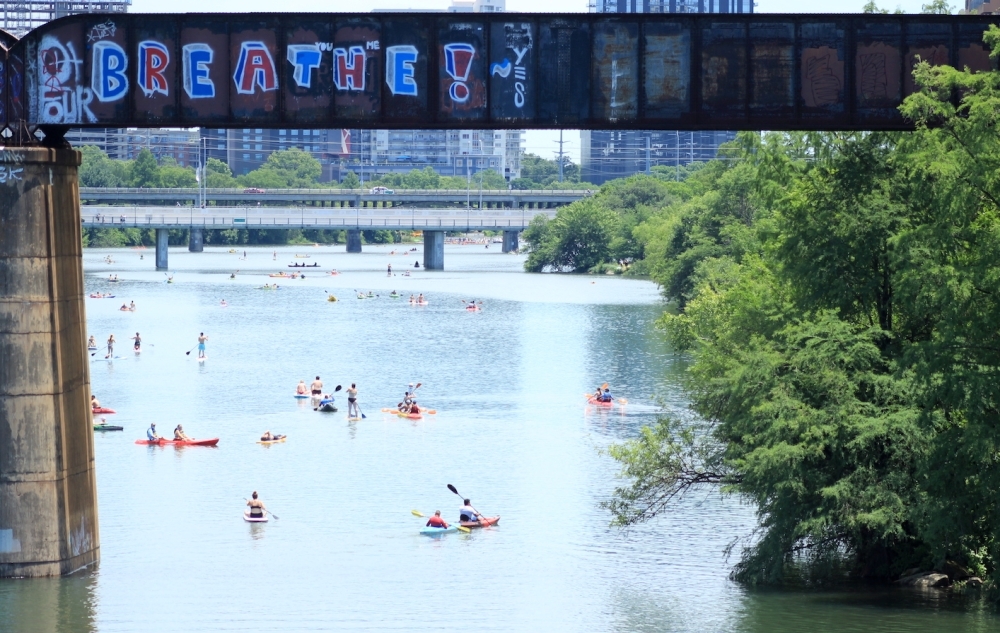 Since summer 2019, the city of Austin’s Watershed Protection Department has grappled with harmful algae in its lakes, and a string of recent occurrences have led the department to ramp up its algae plan.

In early April, amid what the city considered an “offseason,” low levels of dihydroanatoxin—a form of cyanobacteria—were detected in Lake Austin and Lady Bird Lake. Earlier this year, the same toxin, which can be fatal when consumed by dogs, was discovered in Lake Travis by the Lower Colorado River Authority.

In a response, Austin’s department announced June 1 it would expand its plan to include year-round, biweekly monitoring at three sites on Lake Austin and Lady Bird Lake. The city will also monitor a site on Lake Walter E. Long at least three times during the summer and fall seasons.

Results from a June 1 visit to Lake Austin and Lady Bird Lake showed no signs of algae at either location, according to an update on the city’s algae page.

Additionally, in an effort to tackle the algae issue, the watershed department plans to employ a material known as Phoslock, which is patented to mitigate harmful algal blooms.

The clay-like material hinders algae growth by binding to phosphorus, which serves as cyanobacteria’s fuel. Phoslock binds to water and sediment to trap phosphorus in a mineral form, rendering the nutrients unavailable for cyanobacteria, according to Brent Bellinger, Austin Watershed Protection Department senior environmental scientist.

“We are going to target the nutrients that are in the water column and in the sediments,” Bellinger said.

If approved by Austin City Council on June 10, the pilot project would enlist three applications of Phoslock over 20 acres of water surrounding Red Bud Isle.

The 2021 program includes a $300,000 price tag, which will cover the cost of the material, application and extensive laboratory testing, according to the department. During the June 10 meeting, council is set to discuss a $1.48 million five-year contract with SePRO Corp., the company that produces Phoslock.

Phoslock was first developed by an Australian national science agency and has since been included in more than 80 peer-reviewed publications as an effective algae prevention method, according to city information. Bellinger said Phoslock had a particular appeal to the watershed department due to its environmental friendliness.

Methods to kill harmful algae can include copper sulfate treatments known as algaecides, according to Bellinger, who said these have their downsides. While Phoslock does not directly kill cyanobacteria, it can prevent it from occurring, he said.

“Unfortunately, [algaecides] can kill off a lot of other invertebrates that are desired, so we are looking at something that’s environmentally friendly,” Bellinger said. “The other side effect of treating the algae, [with algaecides] again you’re not actually addressing the problem that’s driving the algae growth.”

Phoslock would be applied three times by boat over the span of nine weeks starting June 21. During this time, residents would still have access to Redbud Isle, though the city may utilize signage to inform lake-goers.

While the department believes Phoslock should result in decreased toxicity, recreational users and dog owners should continue to practice caution around algae. Bellinger said the treatment is not a “magic bullet,” and the environment will not automatically become safe upon application.

“This is a pilot project. We know how Phoslock can work, and we’re hypothesizing and hoping that it’ll reduce the algae growth, possibly the toxicity,” Bellinger said. “But we’re still still urging caution.”

Recreational users should never allow their dogs to consume or touch algae while swimming in Central Texas lakes. More information can be accessed through the city’s algae desktop, which will be updated in coming weeks.