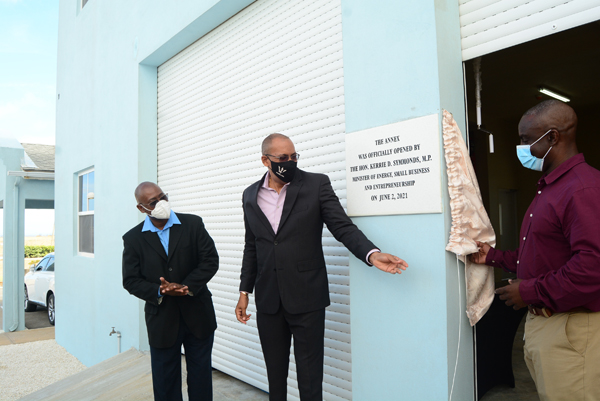 THE Barbados National Terminal Company Limited (BNTCL) is currently doing a pilot study with the view of putting biodiesel on the market.

Word of this has come from Minister of Energy, Small Business and Entrepreneurship, Kerrie Symmonds. He was speaking yesterday at the official opening of the BNTCL Annex, at Fairy Valley, Christ Church.

Minister Symmonds told the audience that the National Energy Policy (NEP), which endeavours to make Barbados 100 per cent fossil fuel free by the year 2030, also speaks to electrifying vehicles or bringing them to a point of carbon neutrality, but he admitted that with some 125,000 vehicles on this nation’s roads, it will be a substantial undertaking and everyone may not be able to convert to an electric vehicle.

As such, he said that the introduction of the biodiesel fuel would allow persons who cannot convert to electric vehicles over the next few years to still maintain their vehicles on the road, in keeping with the commitments of the NEP.

Symmonds said that within the third quarter of this year that pilot study should be rolled out and the fleet of the BNTCL or the Barbados National Oil Company Limited would be able to demonstrate, as a proof of concept, the viability of the biodiesel fuel, so that it can then be promoted for wider public use.

He went on to reveal that greater steps are also being taken to generate renewable energy, with the Cabinet agreeing two weeks ago to the construction of a five megawatt ground-mounted photovoltaic (PV) farm next to the BNTCL’s headquarters. He said the investment to the tune of US$20 million is a “complete embrace” of the NEP and its ambitions.

“We are still awaiting the lease from the Ministry of Housing, Mr. CEO, but I am reliably advised by the Minister himself, that that lease will shortly be brought to Cabinet and go through the necessary requirements of parliamentary approval, so that we will be able to get this project up and running,” he stated.

Meanwhile, he said even though the intention is for Barbados to be fossil fuel free, there will still be a need to import some fossil fuel for the purposes of the aviation industry, in order to service the aircraft that come into the country. In that vein, he said that part of the BNTCL’s business model will still have to take into consideration the aviation sector.

He commended the company on this achievement, noting that they have not failed to deliver since coming into existence. (JRT)