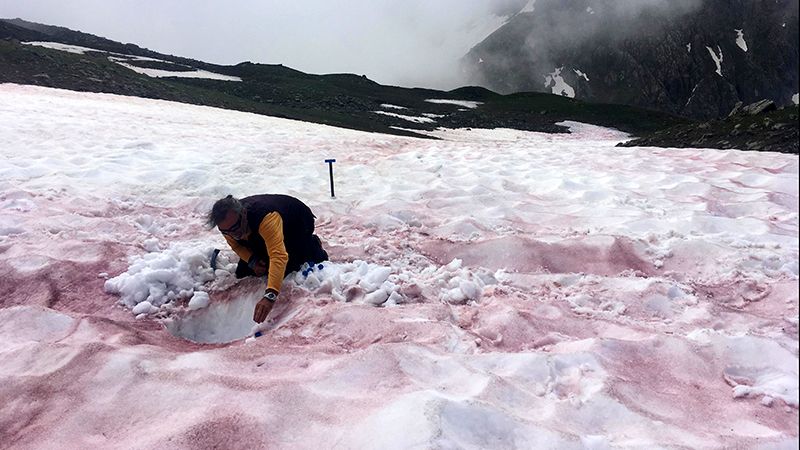 Atop the French Alps, thousands of feet above sea level, the normally white snow sometimes appears stained with blotches of dark red blood, some of which extend for miles.

But no, these aren’t the sites of violent mountaintop massacres — the spooky red stains, known as “glacier blood,” actually come from microalgae that live in the snow, and scientists recently trekked into the Alps to study these mysterious organisms.

The expedition is part of the AlpAlga project, an effort to study microalgae living in the mountains, 3,280 to 9,842 feet (1,000 to 3,000 meters) above sea level. Much like the microalgae that inhabit oceans, lakes and rivers, snow-borne microalgae help form the base of the food web of a mountainous ecosystem and likely react to pollution and climate change in a similar fashion, said Eric Maréchal, a coordinator of the AlpAlga consortium and a director of the Laboratory of Cellular and Plant Physiology, a research facility in Grenoble, France.

“The public is well instructed about the presence of algae in the oceans,” but less aware of related microorganisms living in the soil atop mountains and in the snow that accumulates at those high altitudes, Maréchal said. When the team clambers up mountains in the French Alps, they’re hiking through an environment that’s teeming with microscopic life, “just like in the ocean, but it’s in the snow. It’s in the interstitial water between tiny crystals of ice.”

In general, microalgae cells measure only a few ten-thousandths of an inch (thousandths of a millimeter) across, and they can exist as either isolated single-cell organisms or colonies. They produce sugars through photosynthesis, “and all the ecosystem eats that, directly and indirectly,” whether the algae grows in the liquid ocean or in compacted snow in the mountains, Maréchal said.

The algae that turn snow red are technically green algae, as they belong to the phylum Chlorophyta and contain a specific form of chlorophyll, the green pigment that enables photosynthesis. However, in addition to chlorophyll, these algae also contain carotenoids, the same orange and red pigments that appear in vegetables like carrots. Carotenoids act as antioxidants and likely shield the algae from the damaging effects of intense light and ultraviolet radiation found at high elevations, Maréchal said.

During an algal bloom, when a large quantity of algae grows very rapidly, the surrounding snow can appear red or orange due to the related accumulation of carotenoids — hence the gruesome-looking glacier blood.

Maréchal last saw glacier blood before the COVID-19 pandemic, in spring 2019, and he recalls walking over miles and miles of red snow. “Everywhere I put my eyes, it was red,” he said. “We walked all day, seeing surfaces stained in red … It was really impressive.” But despite glacial blood being a well-known phenomenon, scientists know very little about the algae’s biology, or how climate change might impact this core feature of mountain ecosystems.

Just as nutrient-rich pollution fuels algal blooms in the ocean, nutrients delivered to the mountaintop in precipitation and wind could theoretically fuel algal blooms in the Alps, Maréchal said. And rising levels of carbon dioxide in the atmosphere could theoretically also spur the algae’s growth, he said. While that’s fine for the algae, these changes could trigger a harmful snowball effect in the surrounding ecosystem.

For example, studies suggest that the reddish snow reflects light less effectively than untarnished white snow and therefore melts faster, according to a 2016 report published in the journal Nature. And it’s unclear whether, as with ocean-borne algal blooms, climate change and pollution will cause red snow to appear more frequently, potentially to the detriment of other organisms in the environment, Maréchal said.

At this point, “what we think is that the algae are probably markers of climate change,” in that the organisms’ growth reflects the rising carbon dioxide levels and related changes in the environment, Maréchal said. Although this makes sense anecdotally, there’s not yet enough data to actually track how the algae change through time. “People who are familiar with the mountains, they say, ‘Oh, we see more and more red snows.’ But we don’t actually measure [it],” he said. So Maréchal and his team set out to fill those gaps in the literature.

In their most recent study, published Monday (June 7) in the journal Frontiers in Plant Science, the team studied the prevalence of microalgae species at five different sites in the French Alps, covering elevations between 4,000 and 9,645 feet (1,250 to 2,940 m) above sea level. They collected soil samples from the sites in late summer 2016, after the seasonal snows had melted away for the year. Several members of the team specialized in extracting DNA from the environment, which allowed the group to discover genetic material left from dead, broken algal cells that previously lived in each area.

“Those people are like the scientific police; they can track the presence of organisms with the DNA that the organism leaves behind,” Maréchal said. The team pulled out all of the algal DNA from their samples, revealing which algal species grew where, elevation-wise; the survey also hinted at the environmental conditions each species preferred.

For example, algae of the genus Sanguina, known for causing red snow, appeared only at elevations 6,560 feet (2,000 m) above sea level and higher; meanwhile, algae in the genuses Desmococcus and Symbiochloris cropped up only at low altitudes, below 4,920 feet (1,500 m). “We were maybe expecting something, but not such a spectacular zonation of the species,” with many species exclusively confined to either high or low elevations, Maréchal said.

This study serves as a starting point for the AlpAlga project as the team attempts to address the many remaining questions about glacier blood. We still don’t know what environmental conditions trigger the algal blooms; how the seasonal appearance and disappearance of snow affects the algal life cycle; or how the blooms affect snowmelt and glacial retreat, on a large scale, Maréchal noted.

In an upcoming expedition later this month, the team plans to establish a long-term research site where they can track algal blooms through the changing seasons. They will analyze the gradients between white and red snow, to see what conditions cause blooms to occur, and sample algal cells to cultivate in their labs. These lines of research should not only unpack the mysteries of glacier blood, but also grant insight into how the Alps ecosystem might change as the climate warms, Maréchal said.

Melting glaciers in the polar regions often make headlines, partially because their impact on sea-level rise has been widely discussed, Maréchal said. But climate change also has a huge impact on landlocked glaciers in mountainous regions, where glacial water serves as a reservoir for river systems, he said. So in the long run, the impacts of climate change will be felt in mountainous regions, “even if you’re far from the seashore.”