Liquefied natural gas (LNG) and thermal coal prices in Asia have been roaring ahead in recent months amid strong demand, but while welcome news for the commodity producers, the rally is a longer-term boon to their main rival, renewable energy.

The rally has mainly been driven by increased demand, with the volume of the super-chilled fuel being discharged at Asian ports reaching 22.33 million tonnes in May. That was up from April’s 20.81 million and well above the 18.96 million from May 2020, according to vessel-tracking data compiled by Refinitiv.

The demand has been largely driven by China, which imported 7.31 million tonnes in May, up from 6.52 million in April and the strongest month since January.

While China is driver of spot LNG prices, it’s also playing a role in boosting thermal coal prices, even though its imports are actually weaker so far this year.

That the world’s biggest importer is buying less would appear bearish. But it’s the nature of China’s purchases that are driving the market.

China’s unofficial ban on imports from Australia, the world’s second-biggest shipper of thermal coal behind Indonesia, has roiled markets, forcing Chinese traders and utilities to scramble for coal from alternatives such as Indonesia and Russia.

This has driven up the prices of coal from these producers, in turn forcing India, the world’s second-biggest importer, to increasingly switch away from Indonesia, its former number one supplier, and buy Australian coal instead.

The benchmark weekly index for Australian high-grade thermal coal at Newcastle Port , as assessed by commodity price reporting agency Argus, rose to a decade high of $121.48 a tonne in the week to June 4. That level is almost triple the 2020 low of $46.37, plumbed last September at a time when many Asian economies were locked down as part of efforts to combat the coronavirus pandemic.

Lower-grade Indonesian coal has also performed well, ending last week at $55.04 a tonne, up 143% from its low point in September 2020. 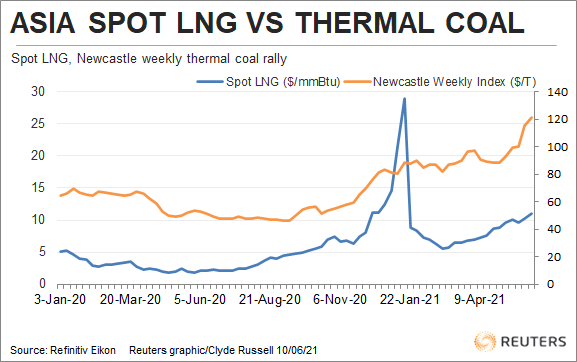 While the price gains in spot LNG and thermal coal will boost the fortunes of producers, who saw profits collapse during the pandemic, it will also sharpen the minds of utilities and countries in Asia planning their energy futures.

Already, coal-fired and natural gas-fired power plants struggle to compete with renewables such as solar and wind, even when battery back-up storage is factored in.

A recent report compiled by Australia’s science agency CSIRO and the Australian Energy Market Operator showed that the current capital cost of building a new coal-fired power plant using higher-grade fuel was about A$4,450 ($3,435) per kilowatt.

An integrated solar plant with two hours of battery storage had a capital cost of A$2,139, above the cost of a combined cycle gas plant – but less than half of a new coal-fired plant.

The figures in the report are for capital costs, and they didn’t assess operating costs, which heavily favour renewables as they don’t require fuel purchases, operate with fewer workers and cost less to insure.

It also excludes the impact of any potential climate change policies being implemented, such as carbon taxes or emissions trading.

An indication of what a carbon-constrained future might mean for coal was that a coal-fired plant with carbon capture and storage was assessed at a capital cost of A$9,311 per kilowatt, rendering it completely uncompetitive with any other type of electricity generation in the study.

Several Asian countries, such as Bangladesh and Pakistan, have recently signalled an end to building coal-fired power plants, and the likelihood of new plants that are reliant on imports being built is rapidly retreating across the region.

LNG producers view their fuel as a more climate-friendly alternative to coal. But while capital costs are competitive with renewables currently, any utility opting for a gas-fired plants based on LNG imports faces risks not apparent with opting for renewables instead.

Chief among them is what has happened in recent months to prices, with wild swings in the spot market: uneven demand caused by a colder-than-expected northern winter drove prices to a record high, following soon after the pandemic caused a slump to a record low in the middle of last year.

Price volatility and security of supply may be LNG’s Achilles heel in Asia, as is the risk that the fuel is increasingly targeted by climate activists, who have already made coal-fired power developments increasingly difficult.

The opinions expressed here are those of the author, a columnist for Reuters.