Action would be a nod to refiners 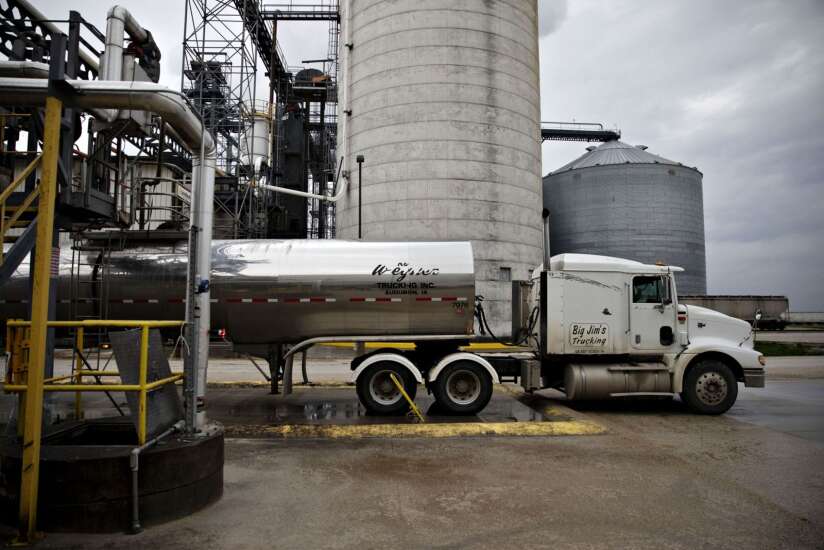 A tanker truck sits outside the POET ethanol biorefinery in Gowrie, Iowa. (Bloomberg)

The Biden administration is developing targets for biofuel that are likely to be relatively flat or even lower as it seeks to balance the interests of blue-collar refining workers and advance a clean-energy agenda.

The U.S. Environmental Protection Agency is set to propose renewable fuel requirements within weeks, according to several people familiar with the strategy who asked not to be named before a formal announcement.

The targets will dictate how much corn-based ethanol, biodiesel and other renewable fuels oil refiners must blend into their products in 2021 and 2022.

The proposal is on track to be issued after the U.S. Supreme Court makes what could be a pivotal ruling on the EPA’s ability to exempt refineries from the mandates.

Oil refiners meet the government’s biofuel quotas either through blending renewable fuels themselves, or by purchasing credits from others that have.

Prices for some of those credits have hit all-time highs this year on expectations the Biden administration would impose more ambitious quotas and stop exempting refineries from them.

Corn and soybean prices also have climbed on expectations of more demand from biofuel makers.

Instead, the EPA is considering more modest targets under the Renewable Fuel Standard program, according to three people familiar with the matter who asked not to be identified describing internal deliberations.

The agency also is moving to abandon a plan for incorporating waived quotas that had been adopted under then-President Donald Trump.

The move responds to pressure from refining advocates who have warned about mounting costs for the tradable compliance credits.

“EPA is working to get the RFS program back on track, and we continue to engage with all stakeholders in that effort,” an agency spokesman said by email.

The efforts mark the Biden administration’s first foray into the notoriously contentious Renewable Fuel Standard, a 16-year-old federal law that requires refiners and fuel importers to mix biofuel into gasoline and diesel.

Biofuel advocates are pushing back against quota reductions, with lawmakers from rural, corn- and ethanol-producing states preparing to make direct appeals to EPA Administrator Michael Regan, according to three people familiar with the matter.