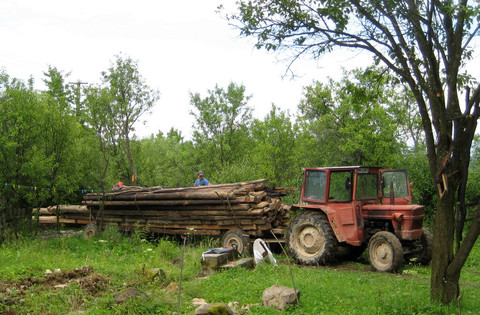 Environmentalists on Thursday (17 June) called on the European Commission to remove forest biomass from a key climate-focus law, arguing that an updated proposal leaked this week shows a “clear denial of science” and “dangerous greenwashing”.

So far, over 200,000 citizens have supported the call to remove such activity from the Renewable Energy Directive (RED).

The RED, currently under revision, sets out rules for burning and subsidising different forms of biomass, including combustible pellets made from wood or solid waste.

Brussels is proposing to strengthen the “sustainability criteria” used to determine whether a form of forest biomass can be considered renewable or not – in a bid to ensure that this activity “is carried out in a way that aims at least at preventing negative impacts on soil quality and biodiversity”.

The leaked document, seen by EUobserver, says that primary forests [essentially natural or old-growth forests, as opposed to those that regenerate or are man-made], highly-biodiverse forests, grasslands and peatlands, known as “no-go areas,” should not be a source for biomass – or at least have limitations.

While about 60 percent of the EU’s renewable energy comes from combusting biomass or biomass-derived fuels, around 18 percent of all EU biomass is made by burning primary forests’ wood.

Moreover, the updated criterion will also apply to small-scale biomass-based heat and power installations with a fuel capacity of more than five megawatts – lowering the current threshold set at 20 megawatts.

The draft also proposes discouraging the use of “high-quality” stem wood for the production of energy – building on the EU biodiversity strategy which also points out that “the use of whole trees for energy production – whether produced in the EU or imported – should be minimised”.

The same strategy, meanwhile, aims to plant three billion trees across Europe in the next decade.

Forests advocates say that the potential changes proposed by the commission are just “window-dressing” that falls short of real reform.

The use of woody biomass in the EU has increased by around 20 percent in the past two decades – a trend especially critical considering that the forests’ ecosystems in the EU are generally not in good condition.

“Forests are not renewable. It is an ecosystem – one that can be restored but not replanted,” she added, arguing that the RED proposal is a “lose-lose scenario for everyone, except the biomass industry”.

Finland and Sweden, two of the most heavily-forested countries in the EU, are considered that sector’s most notable allies.

Environmentalists and scientists have argued that burning forest wood to generate energy can lead to an increase in net CO2 emissions compared to fossil fuels, while weakening Europe’s natural carbon sinks – which help absorb carbon from the atmosphere.

In May, a commission report revealed a 20 percent gap between between reported use and reported sources of woody biomass – which could be associated with illegal logging.

It also affirmed that forest biomass is not carbon neutral, as it is part of a long carbon cycle. A forest stand typically takes between decades and a century to reach maturity.

“The problematic EU policy on biomass combustion is recognised worldwide, except by those who pull the strings in Brussels and do everything they can to maintain subsidies for biomass,” said Fenna Swart from the Dutch NGO Clean Air Committee.

“We need policymakers to go back to the beginning and enact real reforms… based on science,” she added.

EU officials are set to present the review of this legislation by mid-June, as part of the so-called ‘Fit for 55’ package – when the bloc’s overall renewable energy target is expected to increase from 32 percent to almost 40 percent in 2030.

Any legislative adjustment will have to be approved by both member states and MEPs.