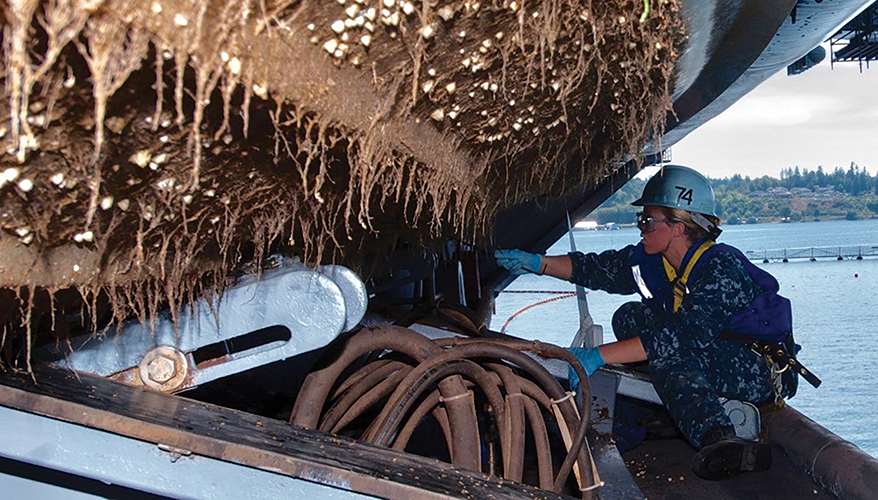 The Naval Research Laboratory is not giving up the battle against one of the sea service’s toughest and longest-standing foes: barnacles.

For mariners, barnacles are an ancient scourge. Even today, they cost the Navy billions of dollars and continue to pose a sticky problem for scientists.

Barnacles, mussels and algae are primary sources of biofouling, and are looking for a place to settle down. They will try to adhere to anything, including the bottom of a ship.

The Navy wants to make barnacles feel unwelcome, said Kathryn Wahl, a chemist and materials scientist from the Naval Research Laboratory and a coatings and biofouling program officer with the Office of Naval Research.

Barnacles are especially problematic because they slow a ship down and increase fuel consumption. Even the newest ship or most recently cleaned hull will be subject to biofouling from the moment it enters the water. Unless protected by an anti-fouling coating, in just two weeks their presence is enough to cause drag and they start becoming hard to remove.

In just six months, a guided missile destroyer’s speed will be reduced by two knots unless the bottom is cleaned, and this effect increases in warmer water. It requires time and resources to scrape them off and takes ships offline and away from their operational duties. That’s why the Navy wants to get the upper hand against these underwater pests.

Better to keep them off the ship in the first place.

“Their success is largely due to an ability to adhere to diverse substrates by secreting a thin adhesive layer that is deposited as the organism grows and expands its base,” Wahl said of the barnacles.

Barnacles, like mussels and tubeworms, secrete extremely strong glues that cure underwater. Mussels can make more than 20 types of proteins in the glue; and scientists have found and begun to identify more than 50 proteins in the barnacle adhesive interface.

The lab’s researchers are examining the chemistry of the glue, how it’s made and how it gets applied to a surface.

They are also studying how the shape and design of the shell, which functions as armor for the barnacle, contributes to the difficulty of removing them from surfaces.

“We are working to better understand how barnacles adhere to surfaces, and through that inform new ways to produce alternatives to toxic paints and surface treatments. Some of our research materials are showing promise in this area,” said Wahl.

The Navy has identified some interesting aspects of the barnacle interface that can help to develop new strategies to combat fouling, she said. Researchers are trying to develop anti-fouling coatings that release barnacles more readily and prevent their growth on surfaces without the use of toxins.

“Understanding the interaction of the barnacle and its interface with the active chemistries in surface treatments is one way we are exploring these opportunities,” she said.

According to Paul Armistead, coatings and biofouling program manager at the Office of Naval Research, anti-fouling coatings come in two main varieties — ablative or self-polishing. These deter fouling by the release of a toxin.

The International Maritime Organization rules regarding anti-fouling paints have become more stringent. Tributyltin, or TBT, used to be the biocide of choice, and was effective at preventing the growth of algae, barnacles and other marine organisms. But TBT also killed other marine organisms and was subsequently internationally banned. Today, paints have become friendlier to the marine environment.

Self-polishing coatings generally require a steady flow of water over the hull, such as a merchant ship that is underway most of the time and travels at a fairly constant speed.

With Navy ships, which can be in port for days at a time, or underway at high speed, ablative coatings can help to slough off marine life that has taken up residence.

Fouling-release coatings are based on silicone resins. “These are not self-polishing, and don’t contain a biocide. They don’t deter fouling, but have a very slippery surface, which makes it hard to adhere,” Armistead said.

Their capabilities are improving. “With older fouling release coatings, barnacles came off at 20 knots. With the newer ones, the barnacles come off at 10 knots,” he said.