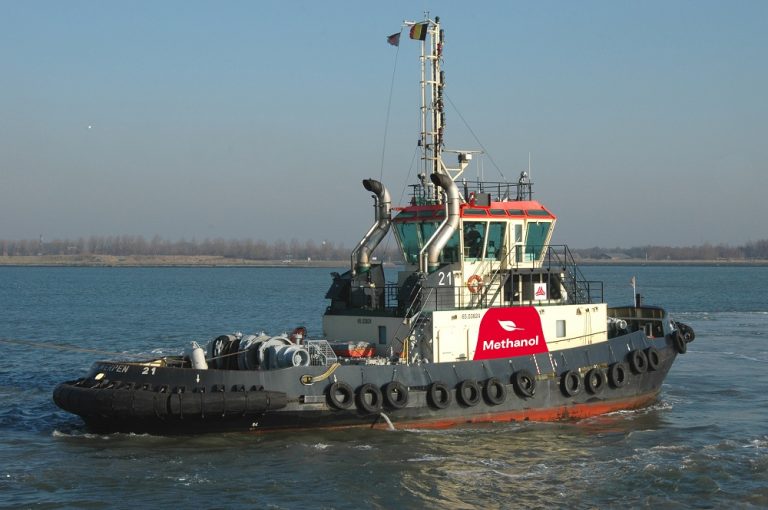 Port of Antwerp is converting a tug into biofuel propulsion – a world first.
The ‘methatug’ is part of the European Union-funded Fastwater project, which aims to demonstrate the feasibility of methanol as a sustainable marine fuel.
The European Commission approved the project on 5 May, a decision that will help the port take another important step in its transition to becoming a sustainable and CO2-neutral port.
Rhine-based inland navigation craft must comply with the Central Commission for Navigation on the Rhine’s (CCNR) regulations, which had previously forbidden the use of methanol as a marine fuel.
The clearance process, which took 18 months of detailed negotiations, was finally agreed by European Commission earlier this year. The methatug is now expected be operational early 2022.
The vessel is part of the Fastwater project, which was set up by a group of European maritime research and technology leaders, including Port of Antwerp.
The consortium aims to demonstrate the feasibility of renewable methanol as a future-proof fuel for carbon-neutral shipping. The tug development has been funded by the European research and innovation programme, Horizon 2020.
Jacques Vandermeiren, CEO of Port of Antwerp: “Together with our partners, we are constantly looking for innovative applications and opportunities for the transition to alternative and renewable energy sources. This methatug is a further and also an important step in the transition towards a sustainable and CO2-neutral port that has enabled us to overcome a variety of technical and regulatory challenges. Thanks to projects such as this, we are paving the way and hope to be an example and a source of inspiration for other ports.”