SINGAPORE (ICIS)–China’s biodiesel exports have been increasing rapidly in recent years on the back of robust demand from Europe, but the industry’s growth has been hampered by absence of government policy support including subsidies, and a lack of cost advantage over fossil diesel.

China exported 911.34 tonnes of biodiesel last year, up by 37.6% on a year-on-year basis, according to China custom’s data.

Of the total volume exported last year, over 97% was sold to Europe, the data showed.

Netherland, Spain and Belgium were the top three destinations which respectively accounted for about 67%, 25% and 5.7% of China’s total exports for that year, according to the data.

Produced primarily from used cooking oil, biodiesel is offered as a low-carbon alternative in transportation, one of the key sectors earmarked for emissions reduction.

As a renewable fuel, biodiesel has significant market potential in China due to the increasingly stringent domestic environment protection measures, in line with the country’s carbon emission goals.

China has pledged to achieve peak emission by 2030 and carbon neutrality by 2060.

Government subsidised biodiesel production is currently only found in Shanghai Municipal City in east China, as part of a pilot scheme to develop the domestic biodiesel sector.

State-owned oil major Sinopec has been offering B5 biodiesel in Shanghai since 2017, according to the company.

Last year, the producer’s biodiesel capacity reached over 400,000 tonnes/year and its B5 biodiesel supply covered over 240 petrol stations in Shanghai, Sinopec said in its Sustainability Report 2020.

But biodiesel is rarely used as land transport fuel in China.

It is mainly used as a green feedstock in the chemical industry in China.

Biodiesel is also used as a fuel in the shipping and industrial sectors.

China’s biodiesel consumption in 2020 was estimated at 800m litres (about 700,000 tonnes), down by 30% from 2019 due to absence of discretionary demand in 2020, according to the Foreign Agricultural Service of the US Department of Agriculture (USDAFAS).

A majority of these enterprises are small-scale, using old technologies and lacking financial might, and hence are prone to risks associated with quality, feedstock availability, and product price fluctuations. 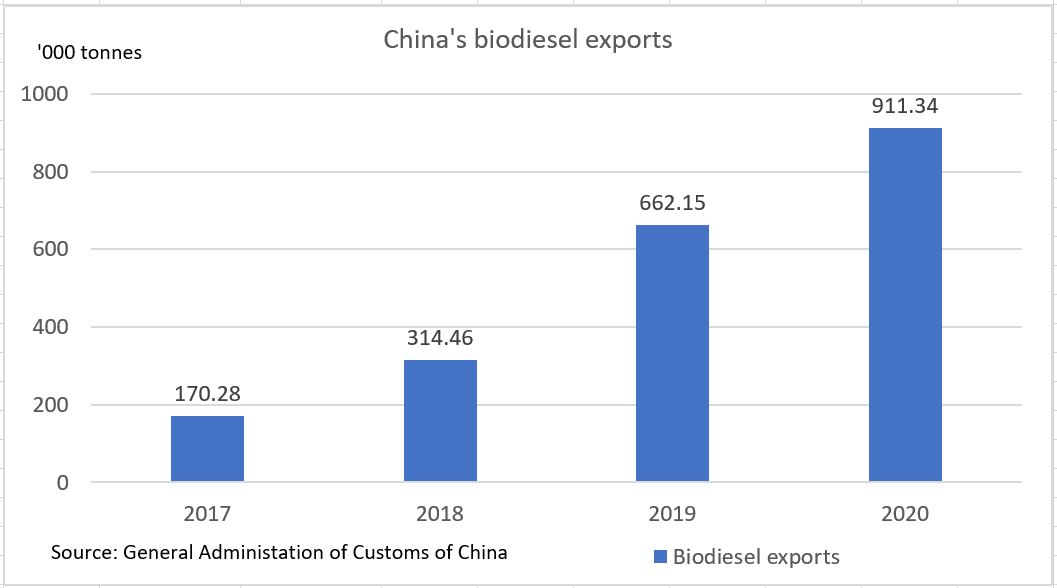