Delta Biofuels Inc. expects to begin groundwork later this year on a $70 million renewable fuel plant that would utilize excess sugarcane pulp, or bagasse, as feedstock. 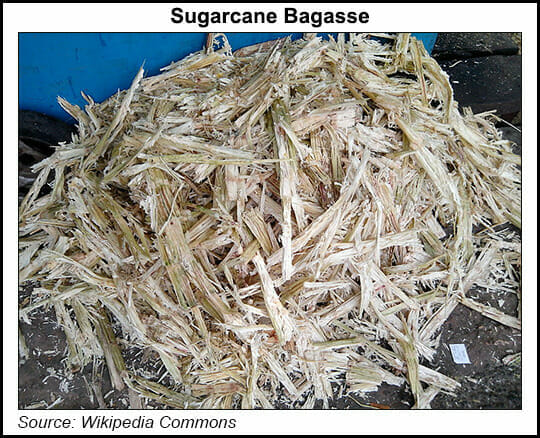 In December, the subsidiary of Tasso Renewable Energy began working with the Louisiana Economic Development (LED) to acquire a pellet plant in Jeanerette, aka Sugar City. According to the LED, Delta has agreements with four sugar mills in Iberia, St. Mary and St. Martin parishes to purchase feedstock bagasse.

The biomass pellet manufacturing plant will use “all excess bagasse produced each harvest,” avoiding methane emissions that would typically be released by sugarcane waste, said CEO Philip Keating.

Delta is looking to erect the plant on 16 acres near Enterprise Sugar Mill, one of its suppliers. The pellet manufacturing facility could produce up to 300,000 million metric tons/year of bagasse fuel pellets. Pellets, according to Keating, then would be “delivered to power generation facilities.

“We have been able to collaborate with our partner sugar mills to produce a solution for their needs, while establishing a viable project that can deliver long-term economic impact for the region and reduce greenhouse gas (GHG) emissions in electricity production.”

Delta has already discussed multi-year contracts for the bagasse pellets with European and Asian energy production facilities that are transitioning from fossil fuels, namely coal. Burning biomass fuel pellets in lieu of coal can reduce GHG emissions by more than 100%, according to Delta.

Renewable fuel production is ramping up in Louisiana. In April, Gov. John Bel Edwards announced a $700 million renewable diesel plant that utilizes wood waste as feedstock would be coming to Caldwell Parish, LA.

Construction for the facility, set to begin in September, could generate up to 100 jobs, according to the LED. Should the plant be completed by September 2022, hiring would begin in spring 2022. The Jeanerette facility could add 126 new direct jobs and 149 indirect jobs to the Acadiana region. The state also is likely to provide Delta a competitive incentive package which could include a performance-based grant of $1 million for infrastructure improvement expenditures. Depending on local approval, the project could leverage the state’s Quality Jobs program and Industrial Tax Exemption status.