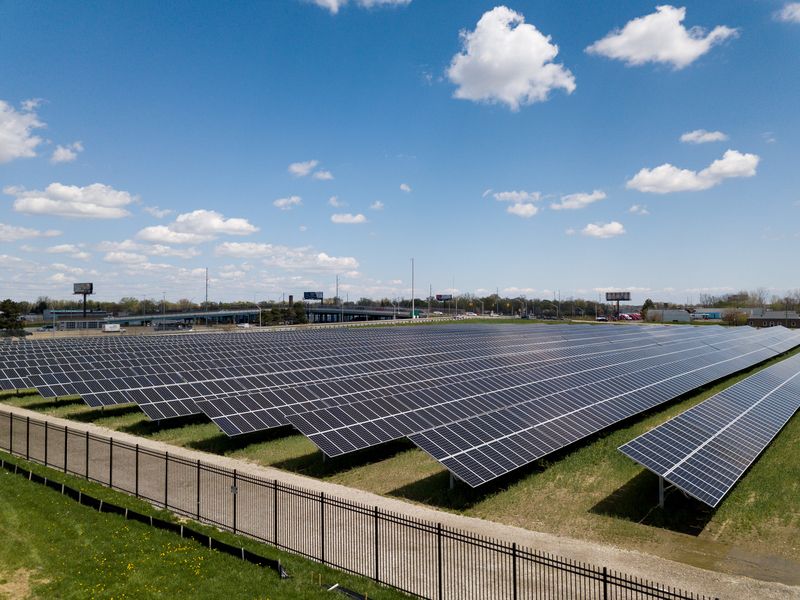 Plymouth-based Link Engineering’s parent company, Link Group Inc., has signed a 20-year agreement with DTE Energy to gradually escalate the percentage of its electricity from wind and solar to 100 percent by 2030, DTE said Tuesday.

“We consider it our responsibility to spearhead industry initiatives for the benefit of all — and that includes sustainability,” said Matthew Link, president and co-owner of Link Group Inc., in a statement.

WCC’s electricity purchase agreement with DTE calls for the college to be powering its campus in Ann Arbor on all renewable sources by 2029.

Link and WCC are among more than two dozen large business customers that have joined the program, which allows businesses to pay a higher premium for the construction and operations of electricity DTE generates from solar installations and wind turbines. Customers later become eligible to receive a credit on their bill based on lower projected energy costs.

“We should end the year north of 40,000” residential customers in the program, Calka said.

DTE Energy is now generating 15 percent of its electricity from renewable energy sources, as required under Michigan’s 2016 energy law.

Electric customers in the MIGreenPower account for 1.8 million megawatt hours or 4 percent of all electricity usage among DTE’s 2.2 million customers, Calka said.

“It’s grown rapidly” since launching in 2017, Calka said. “So 4 percent, it’s a relatively small number. But from a voluntary standpoint, we’re pretty happy with the progress that we’ve been making. But we recognize there’s a lot more work to be done.”

Based on industry data, DTE Energy’s voluntary renewable energy program is considered the second largest in the country, behind Portland, Ore.’s power company and ahead of Sacramento’s main electric utility.

“We hope to take over the No. 1 slot in short order,” Calka told Crain’s.

DTE’s O’Shea Solar Park in Detroit, the Lapeer Solar Park in Lapeer County, the Pinnebog Wind Farm in Huron County and new wind farms in Isabella and Delta counties that came online this spring were projects financed by customers voluntarily paying a premium for renewable energy.

New solar projects totaling 420 megawatts are due to come online in 2022 and 2023 to meet growing demand for the MIGreenPower program, Calka said.

“Due to the growth of the program, we have customers essentially waiting in a queue to be enrolled in 2022-2023, which is when the next wave of our renewable projects will be online for the MIGreenPower program,” Calka said.

GM has an escalating agreement with DTE to gradually get its manufacturing plants, office buildings and other facilities on renewable energy by 2029.

Last year, GM committed to buying 100 percent renewable energy for all of its facilities in Michigan that get electricity from DTE by 2023. Those GM facilities include the automaker’s Renaissance Center headquarters in downtown Detroit, its Tech Center in Warren, proving grounds in Milford, the Orion Assembly plant in Orion Township and Factory Zero, the former Detroit-Hamtramck Assembly Plant that’s being retooled for building all-electric vehicles.

Small businesses that use 1,000 kilowatt hours of electricity monthly pay about $19 more per month for electricity from only wind turbines and about $27 more a month for a blend of wind and solar power, Calka said.

As more customers enroll in the voluntary program and DTE Energy retires the last of its coal plants by 2040, the company expects the cost of renewable energy to level out with the baseline charges for electricity largely generated by coal and natural gas-powered plants.

Last month, the Michigan Public Service Commission reached a partial settlement with DTE Energy that allows the company to increase its electric generation through the program by 797 megawatts in 2022-2024.

Changes in the pricing should “go live no later than” the second quarter of 2022, Calka said.