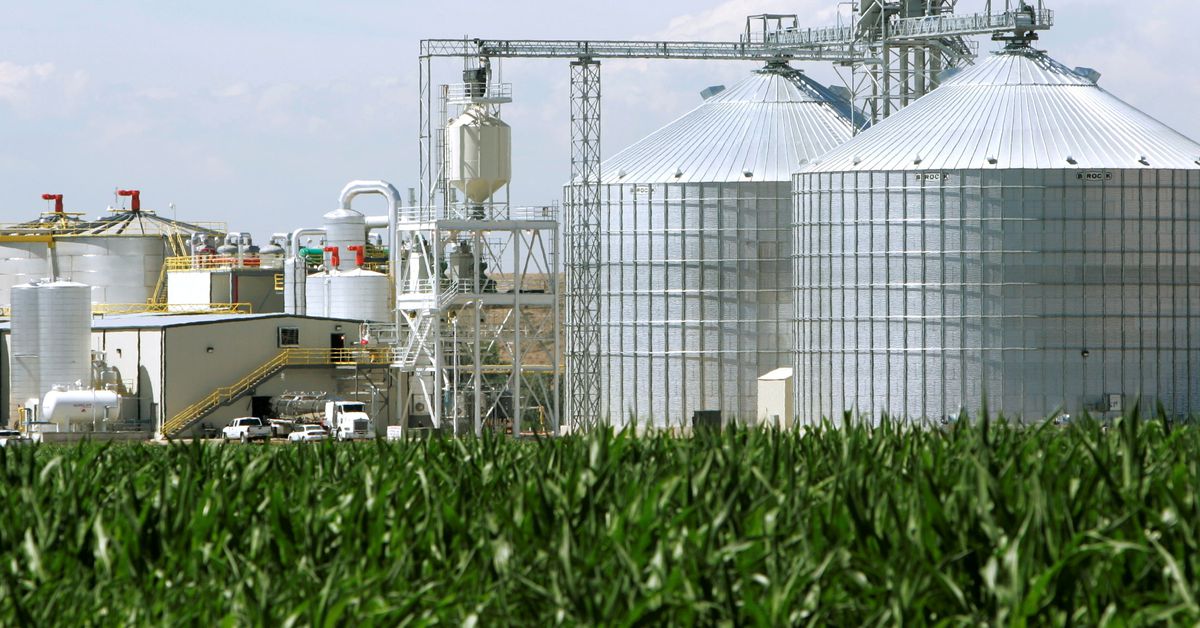 An ethanol plant with its giant corn silos next to a cornfield in Windsor, Colorado July 7, 2006./File Photo

NEW YORK, July 20 (Reuters) – The White House has delayed an annual process meant to decide how much ethanol and other biofuels U.S. oil refiners need to blend into their fuel each year, as it seeks a solution for an issue that pits refinery workers against corn farmers, two sources familiar with the matter said.

Lawmakers who represent constituents from both industries have been pushing the Biden administration on the issue for months. Refiners want low volumes of biofuels to keep costs down, while the farm industry wants high volumes to pump up sales of corn-based ethanol and other products.

The White House has largely stayed out of the discussions but is now hoping to take control of the matter, the sources said.

Ron Klain, President Joe Biden’s chief of staff, is involved in the discussions, the sources said. Lawmakers representing corn-producing states, including Democratic Senators Tammy Duckworth from Illinois and Amy Klobuchar from Minnesota, have made direct pleas to Klain.

A White House official declined to comment on whether the administration had delayed the process, but said it was “not involved in the specific rule-drafting process” at the Environmental Protection Agency.

The EPA, which administers the Renewable Fuel Standard (RFS) program, did not immediately provide comment.

The White House review comes as the Biden administration is hoping to keep Democrats unified on pushing through a multitrillion-dollar infrastructure package that funds most of the president’s top priorities.

Democrats, who have slim majorities in both chambersof Congress, are likely going to have to move the bill along a party-line vote.

Under the U.S. Renewable Fuel Standard, oil refiners must blend biofuels into their fuel mix, or buy tradable credits, known as RINs, from those that do.

The law has been a battleground between the oil and corn industries for years. It has created a 15 billion-gallon-per-year market for corn-based ethanol that has helped farmers.

But petroleum refiners say it adds costs because they either have to invest in biofuel blending businesses, which smaller refiners say is not a viable option, or buy credits from refiners that already blend.

Both the refining and corn industries have waited anxiously for the EPA to announce proposals for the amount of biofuels refiners must blend in both 2021 and 2022. The 2021 proposal is already more than half a year delayed because of the economic fallout of the coronavirus pandemic, which upset energy markets.

The EPA has in the past introduced proposals for the following year during the summer, after a review from the Office of Management and Budget.

Many expected the EPA to send the proposals for both 2021 and 2022 to the OMB in June. That did not happen and a series of court rulings on issues related to the RFS and the biofuels market has amplified confusion around the program for both industries. read more

It was not immediately clear when the EPA would send proposals to the OMB to begin a formal review.