Naila Moloo has always had something really big on her mind . . . How could she make a difference? What could she do to play a role in ending the global climate crisis? Solar energy and its use as a renewable alternative to fossil fuel energy particularly sparked Moloo’s interest and, at the young age of 15, she has set out to give back to the world in an extraordinary way—she is on a mission to create a better, more efficient solar panel.

Passionate and wise beyond her years, Moloo took time away from her busy schedule, as a student, a bestselling author, and the youngest intern ever at Danish tech company Pond Biomaterials, to chat with us about the significance of the technologies she is helping to develop and why this cause is so important to her.

Ottawa Life: What sparked your interest in renewable energy and environmental issues?

Naila Moloo: From a young age, I’ve wanted to play a role in ending our global consumption of fossil fuels. Climate change is an enormous issue that has always stood out to me. In grade five I did an energy exhibition assignment and I chose to look into geothermal. It was honestly so interesting and I loved learning about neat inventions and specifically about renewable energy sources. Over the next few years, I read articles on oil spills, endangered species, and suffering economies, and I became increasingly intrigued about the lack of innovation within these fields. Keeping myself informed was the primary way I engaged with such topics until September 2020 when I joined The Knowledge Society, a student accelerator program. This pushed me to build real projects and solutions. I explored solar energy for most of the year, networking with experts, writing papers, and beginning to develop a deeper understanding. More recently, I began exploring the bioplastic world. In my opinion, our economy, biodiversity, and society are all interlinked. Fossil fuels directly impact biodiversity, which we think of as an economical choice, but really if we keep going down the route we are going, we will not be able to breathe in clean air, billion dollar fishing and hunting industries will not be able to function, and our food and water sources will diminish. That is the version of life we are approaching, and I want to make sure that never happens. 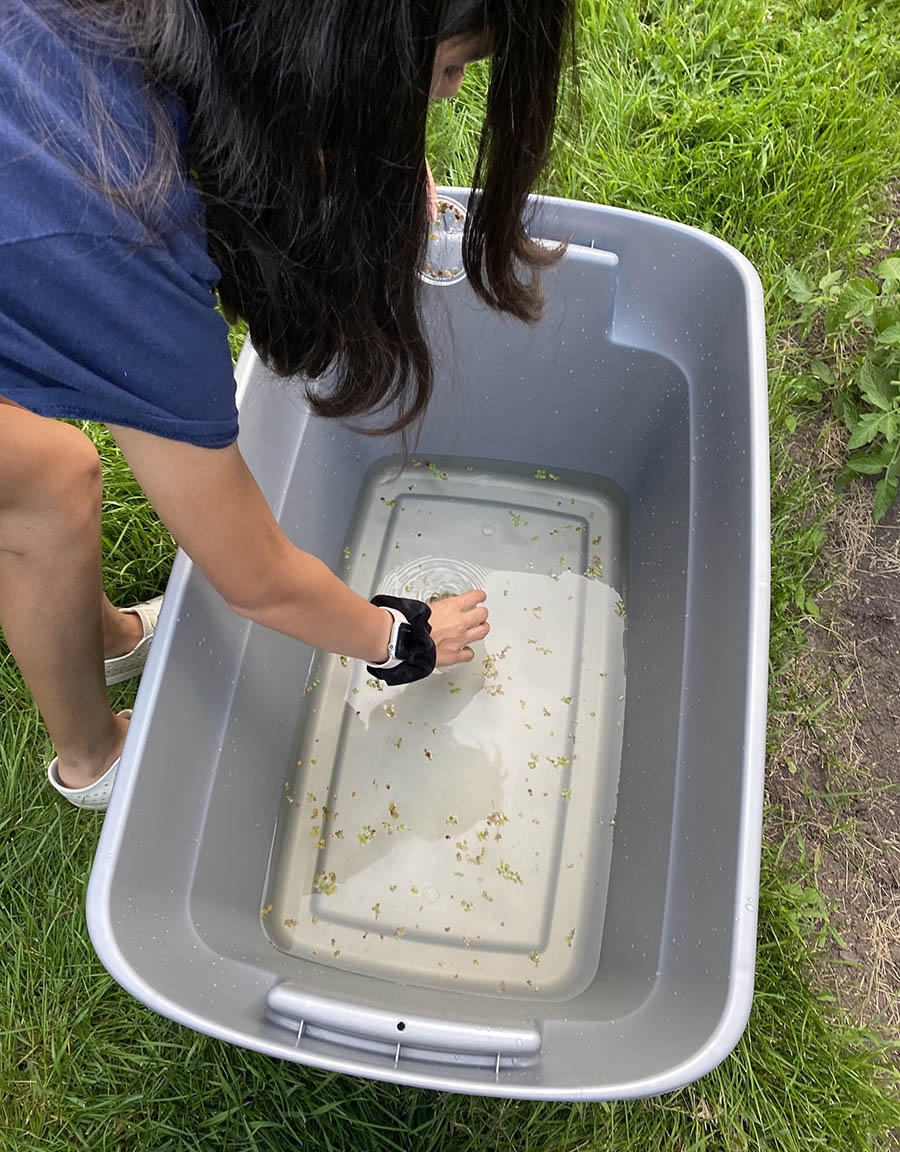 ABOVE: Naila Moloo working with duckweed.

Ottawa Life: Within a span of just eight months, you developed a design for “transparent and flexible cells.” Can you explain to us what that is and why it’s revolutionary?

Naila Moloo: Solar energy has huge potential and if we can get past some barriers, reliance on non-renewables like oil can slowly be shifted toward greener alternatives. However, solar faces a roadblock with regards to where they can be placed, usually being confined to roofs. This limits their potential for widespread implementation. I noticed this problem and knew I wanted to create a solar cell that was both transparent and flexible, as this would allow a panel to virtually be placed on any surface. Applications such as bendable electronics, smart clothing, and solar windows can easily be unlocked — and that would be a game changer. I was intrigued by solar energy’s intersection with nanotechnology as this allows thinner, cheaper, and more transportable layers to be synthesized. I am currently building this out in a lab through the help of my mentor Armin Fischer and am experimenting with graphene quantum dots, perovskites, and silver nanowires. Through this work I am hoping to bring an accessible and cost-effective design to the world.

Ottawa Life: How is it working in a lab and being the youngest intern ever at Pond Biomaterials?

Naila Moloo: Interning at Pond Biomaterials has been so much fun! I’m working closely with the CEO, CTO, and lead chemist who have been incredible. I’m developing a bioplastic from duckweed which has definitely been challenging but a great learning experience as well. Plastic pollution is something everybody knows about but nothing I’d ever thought of looking into at a greater depth, until I came across an interesting article on LinkedIn that really spoke to me. I started researching the industry and came up with an idea for a nanocoil system to break down microplastics in the ocean but soon realized that I wasn’t addressing the root cause of the problem. That’s when I began my journey to build a polymer that could replace single-use plastics all together. There are several problems with bioplastics today, the main two being that they come from our food sources like corn and sugarcane, which cuts into human consumption and agriculture use, and that many bioplastics only biodegrade in super specific conditions. I want to address both of those problems with my design.

Ottawa Life:At just 15 years old, you’re accomplishing things that people double or triple your age haven’t even accomplished. Where do you get your drive and creativity?

Naila Moloo: My parents have always instilled in me a work ethic and desire to drive change in the world. The primary criteria for ‘success’ I grew up with was that my job be meaningful, help others, and bring me fulfillment. I think the environment I grew up in, not only at home but also at school and now TKS has shaped the person that I am today. The support around me is unreal and I am so grateful for the people in my life. Knowing I have the capability to make an impact, and that there is so much room for innovation in this world, is what pushes me to pursue what I do. There’s also a ton of luck to my situation—I am very privileged to be living in Canada, attend school, have a roof over my head, and have food on the table everyday. If I had to worry about surviving, then building projects would obviously not be on my priority list. 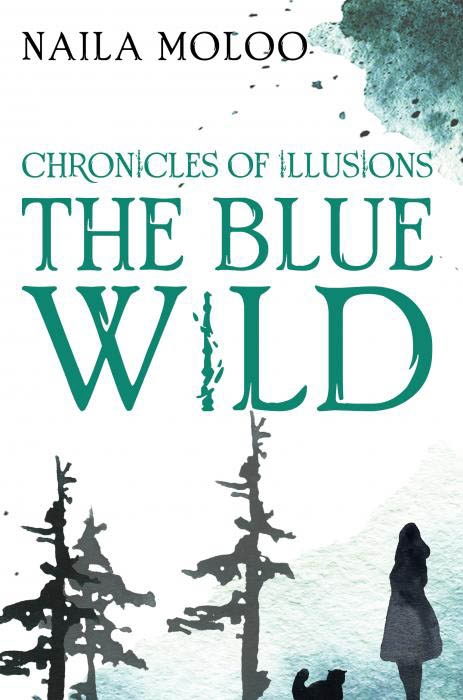 Ottawa Life: Along with all your work in the STEM field, you’re also a published novelist that has hit #1 on Amazon’s “Magical Realist for Young Adults” list! What was the inspiration behind your bestseller Chronicles of Illusions: The Blue Wild?

Naila Moloo: My passion for writing sparked from reading and seeing the influence words can have. I began by writing lots of short stories, submitting them to competitions, and getting a few into anthologies. Over time this extended to longer chapter books and eventually novels. I wrote my first full length book when I was eight years old which was called “Underwater Paradise”. I kept writing and when I was ten I became serious about becoming a published author, so I wrote another novel and got a professional editor. Then I queried about a hundred agents and publishing houses, and was pretty excited until rejections started rolling into my inbox. It didn’t feel great and there was a fraction of me that wanted to give up, but a larger part of me was even more motivated to meet my goal. I went back to the drawing board and wrote another novel when I was twelve years old– ‘Chronicles of Illusions: The Blue Wild.’  I got inspiration from stories I had written when I was little. I had been going through my past writings and saw that, although the execution wasn’t entirely on point, some good ideas were there. I went through the entire editing and querying process again and this time got a lot more interest. I received a contract from Pegasus Publishing when I was thirteen, and in February 2021 the book was finally released! I’m now working on a sequel and a children’s book series on emerging technology, so am really excited to see where that takes me.

Ottawa Life: Any words of motivation to fellow teens who want to pursue their passion and make a difference in the world?

Naila Moloo: My biggest piece of advice is to just start learning. You can learn basically anything on the internet, so start exposing yourself to different topics and problems and see what’s interesting to you. From there, go deeper. Building projects is the best way to learn, and doing so at a young age is valuable because you have so much time and the stakes are a lot lower. Take a field like cancer, blockchain, nanotechnology, etc, and start doing your own research, reading papers, watching videos, and reaching out to experts at the top of their fields. Networking was huge for me—I never realized that through LinkedIn you can reach out to more or less anybody and ask them for 20 minutes of their time. If you build big projects in numerous fields, then you can start making unique intersections that nobody’s thought of. Follow your curiosity, push yourself out of your comfort zone, work hard, and enjoy the journey.