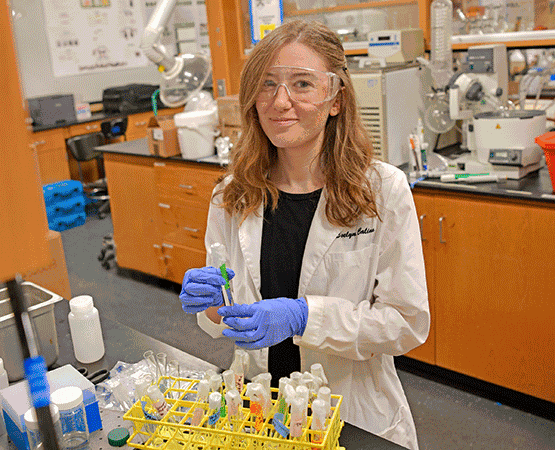 A group of Georgia Gwinnett College (GGC) students and faculty from across multiple disciplines have been doing research that is making a real-world impact on the science of biodiesel fuel.

“Our Environmental Research Cluster is a collaboration of six students and faculty from throughout GGC, and not just science students as we have had students in the School of Liberal Arts also working on projects,” said David Pursell, professor of chemistry and environmental science and one of the overseeing faculty. “There has been a lot of research on biodiesel production from waste oil and grease for probably 30 years or so, and our group is working on methods to lower costs and improve recycling and reuse of by-products of the production.”

2021 graduate Evelyn Calina, who was part of an Environmental Research Cluster of six students and faculty from throughout GGC that worked on the biodiesel project, recently received the American Chemical Society Undergraduate Student Award for her work on the project and for her overall excellence in undergraduate studies. She is the fifth GGC student in the GGC Environmental Research Cluster to win the prestigious award, which is given to only about 20 students per year.

Calina, a Lanier High School graduate who lives in Buford, said she’d never found chemistry in general particularly interesting, but she did have a fascination with organic chemistry and spectroscopy, which is what led her to join the project.

“I love understanding how different bonds and organic structures can be distinguished by simple peaks from electromagnetic radiation, such as in a nuclear magnetic resonance (NMR) and infrared (IR),” she said, adding that when she joined the group she knew very little about what they would be researching. “While renewable fuels are not a new idea, before I started this project I did not know waste oil could be use as biofuel. I understood that biodiesel was fuel made from renewable resources like corn and cane sugar, however, I would have never imagined using used cooking oils to run in engines.”

In the study Calina was involved in, biodiesel fuel was synthesized by collecting waste cooking oil and grease from on-campus dining facilities and using deep eutectic solvents (DESs) in the production to minimize byproducts. The waste oil and grease, which would otherwise be disposed of, was made into a renewable fuel through a chemical reaction called transesterification. The group was able to create and quality test fuel, and discovered the process could efficiently produce sustainable fuel suitable for use in campus utility vehicles year-round.

“There is much more to biodiesel production than just running it in an engine,” Calina said. “Specifically, it involves testing for structure and specific type of oil present, viscosity, the mobility of the fuel in an engine, and combustion of the fuel when burned in an engine.”

Calina pointed out that the work she and her group did was a continuation of work done by previous Environmental Research Clusters at GGC.

Pursell said the overall Environmental Research Cluster project is a vehicle for students to practice using the scientific method to solve problems, supported by their use of state-of-the-art instrumentation and equipment.

“For me the uniqueness of the project is that GGC undergraduate students gain experience that students often don’t gain unless they attend more prestigious undergraduate institutions, or they enter graduate chemistry programs at research universities.”

Calina said she believes the ripple effects of GGC’s Environmental Research Clusters’ work with biodiesel will continue making an impact in the production of renewable fuel sources for years to come.

“I think it’s exciting to be a part of a project that I can see growing into something bigger in the future for renewable fuels,” she said. “I remember as a kid learning about increasing corn prices, due to corn use for biofuel. Using cooking oil from a restaurant that would otherwise be disposed of opens up a more cost-effective option that also reduces waste. I believe our work has been greatly important for that.”

Stacker looks at the metro areas that had the most low-income job losses during the coronavirus pandemic, as calculated with data from the Urban Institute. Click for more.